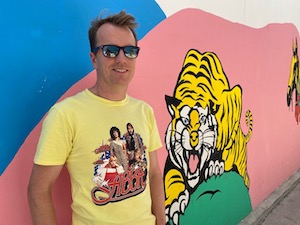 In 2002, Scott McLennan gave away a promising career with the Australian Federal Police in favour of roughing it as a music journalist. Both vocations offered him a chance to question a litany of undesirables and ne'er-do-wells about where they were and what they were doing last night; only one of them paid him in the currency of backstage meet-and-greets and trolley loads of CDs.

Scott worked as a full-time entertainment writer and editor for Adelaide's street press citadel Rip It Up Publishing for a decade. In 2016 he turned to the dark side and became a senior marketing manager at Warner Music Australia, pitching creative and enticing campaigns for the likes of David Bowie, Madonna and Michael Bublé… and having most of them rejected.

Although he now has a 'sensible' full-time job that doesn't offer as many opportunities to wear Milli Vanilli T-shirts and debate how t.A.T.u. were robbed of victory at 2003's Eurovision, Scott still freelances on music projects for Warner when time allows.

A number of Scott's additional run-ins with acclaimed artists including Robert Plant, Ozzy Osbourne and Slash can be found on Scott's personal website thelinesblur.com.au, which also includes a selection of his gig photographs from the past 20 years.

Interview by Scott McLennan, Rip It Up (Australia), Fall 2003

Eels frontman Mark "E" Everett is as slippery as the fish his outfit takes its name from. After weeks of interview schedules aborted due to ...

Baltimore's synthpop trio Future Islands are so hot right now, not even Hollywood royalty can stand in their way. ...

Interview by Scott McLennan, Rip It Up (New Zealand), 2009

Robyn's fronting on mighty pop moments such as 'Konichiwa Bitches', 'U Should Know Better' and 'Criminal Intent' have projected the Swedish star as a bad-ass ...