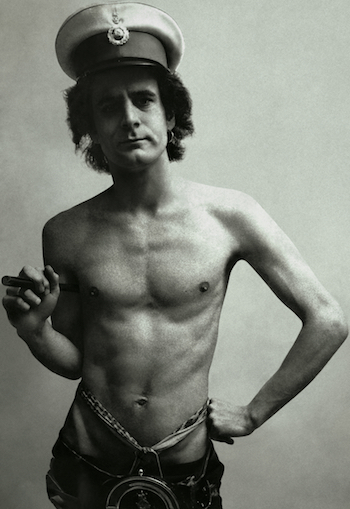 Enchanted by Little Richard in The Girl Can't Help It in 1957, and by spending an evening in 1964 in the Rolling Stones' dressing room before watching their show from the wings, Ed Jones (pictured in 1972) was a musician before propounding a single expert opinion about music. Unlike like many rock pundits. He played bass and sang for Scottish trio the Human Beast, whose weirdly unconventional 1970 Decca album (largely ignored at the time) has since been re-released and bootlegged at least 18 times. It has also frequently been anthologised, and eulogised in print and online, to the present day. A good 1970 copy now sells for around $2,000.

His first-ever interviewee, in 1971, for Edinburgh's tiny but fearless underground magazine Cracker, was Marc Bolan, then at the peak of "T-Rextasy". Jones later became editor, and interviewed Alice Cooper, the Turtles, Family, Soft Machine, Wizzard, Curved Air and others when they ventured to Scotland. In 1974, he moved to London and joined Melody Maker, which involved interviewing the likes of Little Richard, Captain Beefheart, Kim Fowley with the Runaways (the first UK writer to do so), the Tubes (ditto), J.J. Cale (ditto), Alex Harvey and John Martyn etc., as well as news reporting, and reviewing many live shows. He also relished ruffling feathers by forensically dissecting the murky business of the rock industry. He interviewed John Reid (then Elton John's manager) for The Sunday Times, and wrote on music for The Spectator, New Society, Time Out and Sounds.

In 1977, lured by curiosity, fantasies of writing the Great African Expat Novel, and a vast salary, he went to Nigeria to work on a 3,000-km. oil pipeline construction project, as a Russian Interpreter. During this time he saw Fela Kuti perform twice in his beleaguered "Kalakuta Republic". Returning to the UK in 1980, he changed careers again, becoming a multi-award-winning copywriter and Creative Director for Saatchi & Saatchi, variously based in London, Saudi Arabia (where he nostalgically hired Soft Machine's Jenkins and Ratledge to do a Shell Oil TV soundtrack), Dubai, Budapest, and Switzerland. He made hundreds of TV commercials and other ads., and frequently pontificated on advertising and communications, for print and broadcast media including the BBC. He also conceived and wrote the Introduction to the definitive book on cause-related advertising, Social Work (2001). He now lurks in Edinburgh surrounded by his art collection, while plotting new creative projects.

REMEMBER HOW it was last year? Heathrow Airport swamped by thousands of fans welcoming the Osmonds flying in for a tour of Britain? Hordes of ...

The legendary apostle of laid-back rock, J.J. Cale, is coming to Britain for two London concerts next month and his new album and old material ...

"SO THAT band is called Mallard, eh? Well, they'd better duck! Just a bunch of quacks!" So quips Captain Beefheart, briefly in town for his ...

The Faces, Led Zeppelin, The Rolling Stones, The Who: Bands On The Run From The Taxman?

THE PIONEER of psychoanalysis, Sigmund Freud, defined the artist's aims as "fame, wealth, power, and the love of women." Though no one has yet found ...

THE FAILURE of a headlining group to earn the expected encore from its partisan fans must be almost unheard-of these days, but Rod Stewart and ...

AS ROGER CHAPMAN of Family burst on to the Empire Theatre stage the other night, the ecstatic roars from the audience were counterpointed by knowing ...

March 2020 Note: At the time, I took his final comments as being just a rough Glaswegian joke. Unfortunately, it seems it was no more ...

The Walker Brothers: Walk Right Back

IT'S BEEN A hard day in the plush penthouse suite of the Westbury Hotel in Mayfair. The chandeliers in the mirrored hallway have seen a ...