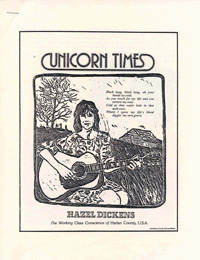 Unicorn Times was published in Washington DC, between 1973 and 1980 and focused on folk, southern rock, blues and bluegrass music.

The Band, Rick Danko: Danko: Happy With His Band — And The Band

THE LIGHTS went down at the Cellar Door and the disembodied voice purred: "Please welcome to our stage, Arista recording artists the Rick Danko Group." ...

The Excitable Warren Zevon: Accidently Like a Rock Star ...

The Rolling Stones: Stones Still Hungry After All These Years

THE ROLLING STONES first crawled into our collective hearts as a teenage working class street punk band. And now, here are Keith Richard and Mick ...

Report and Interview by Geoffrey Himes, Unicorn Times, May 1979

GARY SHIDER and Mike Hampton held the stage at the Capital Centre in the fiercest rock'n'roll guitar duet in any local hall recently. Shider's fingers ...

"...but there is a death in the balance and you better look long and hard at it, you stupid fuckheads, you who treat life as ...

NILS LOFGREN'S LIFE can best be described by a poignant line from 'Like Rain', a song he wrote in his teens that he will probably ...

T-BONE BURNETT STRIDES onstage alone, immediately sitting at the piano. He seems to strike a few soulful chords, wincing at every sound. He stands up, ...