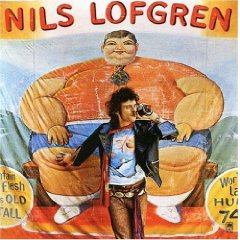 WELL, THIS IS more like it. Nils Lofgren, in his first solo attempt, has come up with a smashing album that restores him to the ...

Nils Lofgren: I Came To Dance

MAYBE NILS LOFGREN always was sort of a dummy. But his heart was in the right place (on his sleeve), he was capable of inventing ...

The diminutive picker looks back on his lengthy, fascinating career: the struggles of Grin; playing on Neil Young's After The Gold Rush, Tonight's The Night, and further Young-led adventures; going solo, and his lengthy association with Bruce Springsteen.

1973 HAS BEEN the year that saw legendary heroes hit the floor. Bryan Ferry lampooned Bob Dylan in a sordid attempt to establish his own ...

Nils Lofgren: Training To Do A Guitar Flip!

NEW YORK: "It's not that I don't like playing with Neil Young," said Nils Lofgren between shots on the pool table in A&M's office last ...

STANDING OVER A pool table in A&M Records' New York offices, lining up a shot and then pausing to draw on a cigarette, Nils Lofgren ...

THE FATE that was thanklessly bestowed upon Grin's fourth album Gone Crazy, is fortunately, and perhaps miraculously, not to apply to this record, i.e. it ...

TEN years after he heard his first rock record: "I thought pop music was too simple, I could call out all the chords and analyse ...

The Selling Of Nils Lofgren

The chalked sign on the blackboard at Manchester University reads: Tonight – Nils Lofgren, and then in brackets Ex-Neil Young & Crazy Horse. The price ...

Nils Lofgren: Back It Up!

AFTER FOUR ALBUMS with Grin, guest-work with Crazy Horse and Neil Young, and one solo album, Nils Lofgren – creator of a body of songs ...

Nils Lofgren: Can He Beat The Press

NILS LOFGREN, AS SHAMEFULLY under-appreciated a top-flight rock & roller as America has ever spawned, now finds himself suffering, ironically, from overappreciation from certain sectors ...

RELAX. THIS kid is hot stuff. Nils Lofgren has not let us down. Cry Tough is the best rock 'n roll album since Nils Lofgren. ...

DEFINITELY A star cover. Great guitar hero pose of Lofgren coolly firing away, shrouded in a purple haze — by far his most sympathetic cover ...

Would you buy a used trampoline from this man? ...

Interview by Barbara Charone, Sounds, 1 May 1976

"I'M A ROMANTICIST for life," Lofgren says, sprawled on the bed of his third floor room at Swingo's Celebrity Motel. "Three years ago I wanted ...

I REALLY wanted to be knocked over, under, sideways, down by the concert. Especially after last November's disappointingly patchy performance. I mean right from those ...

I SAW LOFGREN'S gig at the same theatre at the end of last year. It was duff. His band didn't gell and the sound was ...

Concluding A Natter With The Soft Funster Himself, Nils Lofgren

WHAT ELSE did you do between the breakup of Grin and your first solo album, apart from producing that album for Charlie & The Pep ...

Friday 25th February: Andy Childs talks with Nils Lofgren during a flying visit to London to hype his new album... which is where we begin. ...

Nils Lofgren: I Came To Dance

NILS GOT A haircut. Check the sleek black cover of Lofgren's latest — he looks like a troublemaker. A certified Travis Bickle time-bomb, Nils is ...

THE UNIVERSITY of Texas auditorium was packed and standing with 3,300 big people. Some were seven foot tall, wearing Stetson hats, cowboy boots and chewing ...

The Second Coming of Nils Lofgren

IT'S A COMMON complaint among watchers of American late-night television. Everything is going along as normal, all the right cliches are being spoken, when you ...

The Who / The Stranglers/ AC/DC /Nils Lofgren: Wembley Stadium, London

NOT ONE OF the great Wembley encounters, we decided, as the car crept another couple of feet in the late Saturday evening jam. ...

Who, Stranglers: Laser Laser On The Wall Who Are Complacent After All

THE MIDDLE OF the evening and it's getting quite dim. The Who are playing a new song; at least, I take it to be a ...

NILS LOFGREN was widely regarded as a sure bet for rock stardom during the mid '70. The singer-songwriter-guitarist's early solo albums and efforts with the ...

ONE: FINGERNAILSNILS LOFGREN is a small man with a lovely face. One chocolate brown eye is smaller, almost lazier, than the other; this gives his ...

This LP — Lofgren's first since 81 — sails off on a gritty, catchy duet with Edgar Winter, then slides into a loner ballad ('Into ...

NILS LOFGREN'S LIFE can best be described by a poignant line from 'Like Rain', a song he wrote in his teens that he will probably ...

On the eve of Springsteen’s London dates Ralph Traitor tracks down Nils Lofgren, the latest resident on E street. ...

NEW JERSEY – There he is, taking windmill swipes at his guitar with wild abandon, then doing a complete flip on the Meadowlands stage while ...