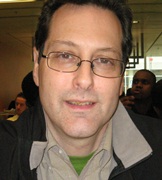 Larry Jaffee is a freelance writer living in New York. His writing, much of which has been music-related, has appeared in The New York Times, Rolling Stone, Vibe, Record Collector, The Word, The Audiophile Voice, Billboard, Tower Records’ Pulse, Popular Music & Society, BMI Music World, The Wiz Beats, The Beat, Good Times, amNY, Mother Jones, Hollywood Reporter, High Times, and High Fidelity, among other publications. From 1998-2005, he was a contributing editor to the Bob Dylan fanzine On The Tracks, for which he interviewed the likes of Kris Kristofferson, Roger McGuinn. Loudon Wainwright III, Ian Hunter, Billy Bragg, Carolyn Hester, Jacques Levy, Kinky Friedman, D.A. Pennebaker, Nora Guthrie, among numerous other Dylan associates.

Jaffee edited a CD/DVD production trade magazine called Medialine from 1998-2005, and has continued to write about the packaged media industry for MediaPack, One to One, Digital2Disc and Package Design magazine. In 2003 Jaffee launched the Alex Awards for Packaging Excellence, which ran from 2003-2006, in honour of Alex Steinweiss, who created Columbia Records’ first album cover in 1940. He also wrote the liner notes to the surround/Monster Music release of George Benson/Al Jarreau’s Grammy-winning album Givin' It Up.

As a consultant, he has been on retainer to music attorney H. William Krasilovsky. For nearly 20 years, Jaffee has also edited and published the Walford Gazette, the world’s only quarterly newspaper dedicated to EastEnders (www.wgazette.com), with permission from the BBC. This entrepreneurial venture has resulted in two recently published books Walford State of Mind and Albert Square & Me: The Actors of EastEnders.

Larry is the cofounder of Making Vinyl. His book Record Store Day: The Most Improbable Comeback of the 21st Century is published in April 2022.

SID VICIOUS, bass player for the now-defunct, notorious punk rock band, the Sex Pistols, pleaded not guilty on November 21; at his arraignment to the ...

"I LEARNED MORE in the last three years than I would in 20 with Mott The Hoople," said Ian Hunter recently while awaiting to join ...

Da Brudda gives us his Desert Island Discs and raps about record labels, producers and the musically and politically sterile 1980s.

K-Tel's Place in the Music Industry: Where Have All the One-Hit Wonders Gone?

COMEDIAN ROBERT KLEIN has a story about how you can call up K-tel and order every record ever made. A forty-foot trailer will drive up ...

Scott-Heron talks about music and politics, Reron and B Movie, Sun City, Clive Davis and Arista/RCA, and ruminates on favourites old and new.

NOTE: This interview was intended for Tower Records' Pulse!, but was rejected for fear that Arista Records would pull its advertising. ...

The venerable folkie looks back to the Yale folk scene, and first meeting Dylan; discusses who actually wrote 'Baby Let Me Follow You Down' — the Rev. Gary Davis? Blind Boy Fuller? Von Schmidt? — and Dylan's magpie tendencies; he also recounts meeting Dylan in London in 1963 with Richard Fariña, and drinking gin and smoking pot.

Bob Dylan: Bobfest: Bringing It All Back To Dylan

He's a pop-culture icon who gave the 1960s counterculture an attitude, a look and a song, 'The Times They Are A-Changin'', that became the anthem ...

The legendary Crawdaddy! founder talks about his Dylan books Bob Dylan: Performing Artist and What Happened?, and lots more Bobology besides.

Marley Catalog Is A Source Of Strife, Suits ...

PHIL RAMONE is a legendary music producer who's been at the helm on recordings by a who's who of 20th century popular music, the likes ...

The legendary producer/engineer talks about the internet and file sharing, the thorny process of CD remastering of classic albums, and revisiting such classic albums as Paul Simon's Graceland and Bob Dylan's Blood on the Tracks.

On The Raven, the ups and, mostly, downs of CDs, mp3s and (re)mastering and more.

Lou Reed: The Artist on the Biz

AT THE 45th annual Grammy Awards ceremony last month, Lou Reed was introduced by his co-presenter of the Best Pop Song category as a "true ...

Interview by Larry Jaffee, On the Tracks, December 2003

LJ: IN YOUR BOOK Reflections of a Rock Star, it mentions your life-long ambition was to meet Dylan was set back again. You said you'd ...

Frank Zappa: We Need a Frank Zappa for the 21st Century

A TRIBUTE TO Frank Zappa was one of the highlights of Surround 2003 at the conference's awards show Dec. 11 at the Beverly Hills Hilton, ...

Interview by Larry Jaffee, MediaPack, May 2006

ONE OF THE mid-1970s' (not to mention Homer Simpson's) most beloved "Power Pop" bands, Cheap Trick is still going strong, hitting dates this year on ...

SINCE JOINING indie label Anti/Epitaph, Tom Waits has released four albums, the Grammy-winning Mule Variations (1999), Real Gone (2004), and in between, simultaneously Alice and ...

Tool: When A Special Package Becomes The Standard

Elvis Costello: Flogging A Dead Horse: Reissuing back catalog ad nauseam is no way to revive an ailing record industry

YES, THE PRE-RECORDED music industry is mired in the throes of a tailspin from which it most likely will never recover. This, of course, is ...

Report and Interview by Larry Jaffee, The Word, 12 September 2008

NEIL YOUNG HAS BEEN such a music staple in our collective consciousness for so long that it’s nearly impossible to remember that he was once ...

LIKE MANY singer-songwriters, Robyn Hitchcock needs to supplement his boundless creativity with art forms in addition to music. Not surprisingly, when he's not releasing albums ...

SITTING IN THE audience prior to Bryan Ferry's solo gig at the Beacon Theatre – his first show in New York since the 2003 Roxy ...

Nico: Chelsea Mädchen: The Funny Side of Nico

NICO NEVER STRUCK me as funny. Some of her more morose material, such as her even more gothic take on the Doors' 'The End', or the ...

MARIANNE FAITHFULL'S welcome return to the New York concert stage reminded one of that funky old aunt in everyone's family. You know, the one who ...

IT'S NEARLY A certainty that globally two Steppenwolf songs will be played every day on terrestrial radio or Internet-based stations or music sharing services. Yes, ...

THE LAST TIME I saw a Fleetwood Mac concert was in 1979 on the heels of the last album of theirs that really mattered to ...

TALK ABOUT SECOND acts. After much success as an acclaimed recording artist and performer from the early 1970s through the early 1980s, Garland Jeffreys sort ...

While he's known as a '60s counterculture icon for his raunchy yet brilliant comics, illustrator Robert Crumb's heart lies in the '20s and '30s. His ...

AMERICAN SINGER-SONGWRITER Aimee Mann once told me during an interview how male executives from major record labels always gave her problems when she wanted to ...

MY FIRST REVELATORY encounter with Patti Smith was listening on the radio in the fall of 1975 around the time of the release of her ...

DAVID BOWIE embodied the fictional character of Ziggy Stardust for only about 18 months circa 1972-1973. Yet it's usually an image of that garishly made ...

Report and Interview by Larry Jaffee, Huffington Post, 21 May 2016

THE BREAKOUT HIT from the first Dr. Buzzard's Original Savannah Band album in 1976 was 'Cherchez la Femme', a sublime dance hit that even appealed ...

Prince: The Sexual Politics of Prince

PRINCE'S UNEXPECTED passing on April 21, 2016, shook popular culture and resulted in the long-overdue recognition of his unique musical genius. Yet Prince enigmatically contradicted ...

What Goes Around, Comes Around (or) Vinyl's Back and It's Not a Fad

The LP's Return Picks Up Traction ...

UNDERWHELMED BY the mellow country rock of Nashville Skyline, two Bob Dylan fans in the summer of 1969 in southern California unwittingly gave birth to ...

Leonard Cohen: His Muses Were Many Women

THE NEW DOCUMENTARY Leonard & Marianne: Words of Love, directed by Nick Broomfield, ostensibly is about the romance on the Greek island of Hydra in ...

IF BLUES LEGEND Big Bill Broonzy (1893-1958) plied his trade in the 21st century, he'd probably be an Uber driver. A gig-economy practitioner in his ...