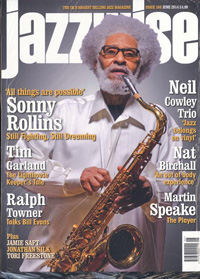 What record company these days would dare print "the Artists Alone Decide What You Will Hear" on their album sleeves. Well ESP Disk did in ...

Rolling Stone Charlie Watts is not a typical jazz drummer. His previous solo albums have touched on the legacy of Charlie Parker and his new ...

All at sea: Jazz Party at Sea

Jazz gets a life on the ocean waves. ...

MANCHESTER's GoGo Penguin prove, among other things, what a rhythmic gift the drum 'n' bass dance scene, which began in the 1990s, has been to ...

Pressed rolls and warthog: The life and times of Ginger Baker ...

From early 1960s gigs with Terry Callier and having a song covered by Miles Davis to latter-day collaborations with Snarky Puppy and Steely Dan's Donald ...

Fifty years ago this month Miles Davis played the biggest gig of his career when he brought his groundbreaking Bitches Brew band to the 1970 ...

Hammond B3 honcho "Baby Face" Willette kicked off the early 1960s as a promising new Blue Note label signing in the wake of Jimmy Smith's ...

The gentleman of rhythm calls time ...