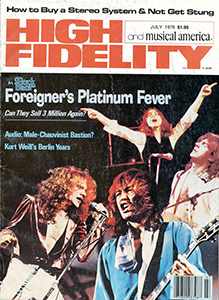 High Fidelity was an American publication covering both music, its creators, and the technology with which it was played and recorded.

NEW EDITION'S hit 'Candy Girl' is an uncanny re-creation of the early Jackson 5's pop-soul effervescence, down to the last vocal inflection. But it's not ...

The PMRC isn't only out to censor sex and violence. John Denver could be next. ...

THIS IS A test. Entrepreneurs Rick Rubin and Russell Simmons recently inked a distribution deal with Columbia, heralding potentially the biggest commercial boost to underground ...