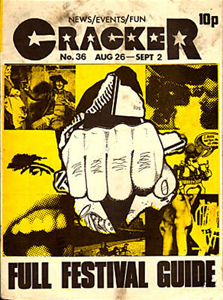 Cracker was a cultural listing magazine published in Edinburgh during the 1970s.

WELL, YA KNOW HOW IT IS ON SATURDAY EVENINGS. The rain was terrible, and I couldn't get a bus and, well, by the time I ...

AS ROGER CHAPMAN of Family burst on to the Empire Theatre stage the other night, the ecstatic roars from the audience were counterpointed by knowing ...

THE MUSIC PRESS USUALLY PORTRAYS ROY HARPER as a kind of fringe lunatic whose gloomy and paranoid view of the world reflects a personal pain ...

WHEN I HEARD LINDISFARNE'S FIRST ALBUM, Nicely Out Of Tune, with its standout track, 'Lady Eleanor', a year and a half ago, I thought that ...

ONCE UPON A TIME there was a 10-years-in-the-business guitarist/ songwriter who had to get his second solo L.P. together while simultaneously trying to keep his ...

AS WE CRUISED TOWARDS GRANGEMOUTH in the Cracker-mobile, hoping for a day of peace'n'love near Falkirk, our suspicions should have been aroused by the RAC's ...

GREEN'S PLAYHOUSE is like a vast seedy Roman amphitheatre, a black roaring cauldron of sweat, smoke and screams. The Glasgow audience is tough, gritty and ...

AROUND O-LEVEL time in 1964, I went to the Usher Hall to see the Moody Blues in concert. 'Go Now', that anthem of pleasant teenscene ...

THE FIRST I REMEMBER HEARING OF JEFF BECK was when he was in The Yardbirds, around the time Clapton and Jimmy Page were coming up ...

WHY DOES EVERYBODY TALK ABOUT GLAS­GOW as if it's some kind of Clockwork Orange nightmare? In Glasgow the policemen ask you to go to the ...

AFTER MORE THAN AN HOUR'S TEDIOUS WAIT while the roadies languidly set up their gear, Argent began with 'It's Only Money': strong vocals, synthesiser from ...

I WAS SURPRISED when Faust's third album, The Faust Tapes, became a chart hit (even at only 48p.) because it seemed so wilfully arbitrary and ...

WITH THE demise of the Mahavishnu Orchestra, other record companies are looking for their own spacey, super-excellent, speedy-riffing jazz-rock group to grab some of the ...

Nektar: A Tab In The Ocean