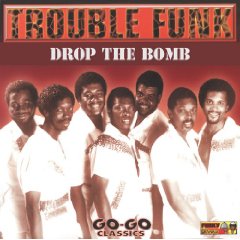 Drop The Bomb! The First Citizens of the Chocolate City talk about everything Go Go: the audiences, the live thing, getting energy from the people and the Washington DC scene.

Trouble Funk On A ‘Go-Go’

IN WASHINGTON DC, a city that has its fair share of fast-buck entrepreneurs and exploitable kids, Trouble Funk's understanding of the music machine marks them ...

Trouble Funk's go-go too much of the same ...

JUST THE other night I achieved a tiny slice of immortality when radio-jock Andy Kershaw played a 1960s Texan garage nugget of which he knows ...

TROUBLE FUNK are going where no go-go has gone before, to radio-land. JOHN McCREADY supports this funky plan. ...

SOME CLAIM Angel Dust is a one-way ticket to oblivion that brings out the random psycho in you. Forget it. These bona fide purveyors of ...

Trouble Funk: Free Your Ass And Your Mind Will Follow!

The gospel according to the new Trouble Funk album Trouble Over Here, Trouble Over There is: educate, agitate and organise. MAT SNOW meets the REED ...