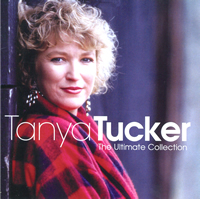 I AM NOT in the habit of chasing after 14 year old girls. Recently, though, I not only met a cute one, but crossed several ...

TANYA TUCKER'S third album, like the first two, contains many covers of recent country chart-busters, competent but rarely inspired backing, and an almost smothering use ...

WITHOUT A doubt, Tanya Tucker is singing better than ever on this album, her third. Nobody, but nobody, can cram as much emotion into a ...

THE CHOCOLATE-smothered Rice Krispies cup cake lay half-eaten on the plate, neglected after the first bite. Tanya, it seemed, was not in the best of ...

Tanya Tucker: Yet Another Excuse To Print A Picture Of A Young Girl With A Guitar

WILL THE ICE remain unbroken? Shucks, these phone interviews are a pain (both for the artist and the journalist). I mean, it's not easy encapsulating ...