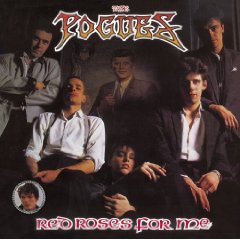 The Pogues: The Sweet Smell Of Success

TODAY THE WORLD, TOMORROW THE WORLD ...

GAVIN MARTIN meets the punks who turned to Irish folk music and became the Pogues with the brogue ...

The Pogues: For A Few Ciders More

A TABLE littered with the debris of an early evening's drinking, three Pogues attempt to justify their existence. ...

SAINT PATRICK'S NIGHT the occasion and The Pogues the attraction; in a very large room, the world congregates. Crowds a mile wide inside the lavatories ...

They're of Irish descent! They play hectic punk-folk music! They leave no table unturned! ...

NO SLEEP AT HAMMERSMITH! ...

The Pogues: Aye, Laddie — We're Off To The Isle…

The Pogues: It's Really Pogue, Man

TALKING TO Shane MacGowan, singer and lyricist with a spirited bunch of North London Irish lunatics called the Pogues – trying to decipher the words ...

The Pogues: The National, Kilburn

"WE WANT CAIT, we want Cait," chanted the barmy army at the front rather ungraciously before it all began, and I have to say I ...

U2 MAY BE the most popular band in the world, but the group that knocked them off the top of Ireland's pop charts recently was ...

The Pogues: If I Should Fall From Grace With God (Pogue Mahone)*****

THE UNDERDOG BITES BACK! ...

The Pogues: If I Should Fall From Grace With God (Pogue Mahone NYR 1)

Gleeful — The Pogues: If I Should Fall From Grace With God (POGUEMAHONE NYR 1 LP/Cass/CD)

BY RIGHTS, The Pogues should surely be dead by now, overcome by the drink or the enthusiasm of their fans. Yet somehow they've survived the ...

Shane MacGowan: Dark Side of the Hooligan

Shane MacGowan has not been a happy man since the 'natural living' days of punk. Now he's disillusioned with the Pogues and a recent medical ...

The Pogues: The Best Of

SHANE MACGOWAN HAS set himself a truly heroic task: in the seven-year lurch of The Pogues, he has distilled an aromatically personal poetic myth from ...

Cancel the hearses! Desist with the obituaries! For Shane MacGowan lives, in spite of a heroic chemical intake and his ownership of the Western world's ...

From The Kinks to Carter, Bowie to Blur, the Small Faces to Suede, British pop groups have eulogised, mythologised, criticised, glamorised, immortalised, romanticised and agonised ...

Shane MacGowan: One More For The Road

THERE ARE THOSE who believe that Shane MacGowan is among the most gifted and singular singer-songwriters to have emerged in British music in the past ...

Shane MacGowan: It's A Long Way From Tipperary

AS PUNK PASSION dissipated and died, choking on its own irrelevance, a generation of serial venters were suddenly deprived of its primal, therapeutic effect. The ...

NO ONE THOUGHT this would happen again. When Shane MacGowan split from the Pogues in 1991, because of growing drunken unreliability, the idea that he'd ...

Sound in other media. This month: David Toop talks to Jem Finer about his transition from banjo plucking with The Pogues to computer-decomposed improvisations and ...

I REMEMBER a three month stint in 1986 as a trainee chartered accountant, a profession for which I was ill-suited in every respect except the ...

BECAUSE HE'S A true poet, we'll always forgive him. With lesser mortals, you'd gaze upon a man staggering and swaying, mumbling his words and randomly ...

The Pogues: House of Blues, Boston

THE POGUES PLAYED a packed House of Blues on Friday night, offering up a rowdy mix of songs both angry and wrenching, vicious and sentimental, ...

see also Nips, The (aka The Nipple Erectors)