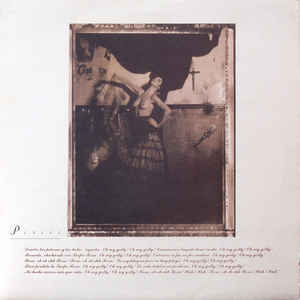 The Pixies Facing The Fire Squad

The pixies are the best band on the planet. Discuss. ...

The Boston indies talk about their working processes and place in the musical scheme of things; discuss their name, and more.

Black Francis on the telephone, talking about The Pixies' major label debut, his influences ranging from his Pentecostal background to the movies of David Lynch, and his "Black Francis" persona

PIXIES QUOTE The Fall (a mangled snatch of 'Stephen Song' in 'I'm Amazed'), so we can: "They pass my home at night/oh they are NOT ...

"WHERE IS my mind?" smirks huggable Black Francis, and you can't help but rattle your jewellery. If "bloody your hands on a cactus tree/wipe it ...

The Pixies: Speaking In Tongues

THE HOLLERING IS ALL. The Pixies are what's left when all the frustrations and absences that once prompted rock'n'roll into being have faded away or ...

"WHAT ABOUT those Pixies – motherf***ers, huh?" enquired a grinning Kristin Hersh of Throwing Muses. She referred to the previous band and no one in ...

This might be their first European tour, but PIXIES are already being hailed as a rock 'n' roll band without parallel. ROBIN GIBSON roots through ...

Interview by Martin Aston, The Catalogue, 1989

THE PIXIES, in the space of time it takes to skin a Bros, have been hailed as rock's saviours, Those That Will Save Us From ...

THAT LITTLE MONKEY with the halo hot-wired to its tiny skull – the central image for both the Pixies' latest single and this, their second ...

Only a year after their first ever UK visit, Pixies are a Top Ten albums band! Keith Cameron joins their tour in Brighton to find ...

HAD SOMEONE predicted in 1978 that 49,223 people in a stadium would one day clap and sing along as the Gothic rockers in the Cure ...

The Pixies: Ditties Of Pixilated Reasoning

Interview by Simon Reynolds, The Observer, 1990

A year ago, the Pixies were considered the last word in rock bacchanalia. The Boston-based band's three albums – Come On Pilgrim, Surfer Rosa and ...

THE EVER-SO-ARTY lyric book that accompanies the new Pixies album contains the words to a song that you will not find on the record itself. ...

The Pixies: Tyranny And Mutation

A PIXIES album that isn't drenched in murder, mutilation, death, crucifixion, blood, evil and barbarism? It's hard to imagine, but that's exactly what the band ...

ONE THING that's always bugged me about The Pixies is the universal acclaim for their LPs – how come no one ever gripes about the ...

QUEASY The Pixies: What can they mean? What are they on? ...

The Pixies: No Time-Wasters!

"IT'S NOT I'M ORIGINAL or anything." Charles Kittridge Thompson IV, aka Black Francis, Pixies frontman, is describing how he comes up with the lyrics to ...

WATCHING THE Pixies in a rock venue as mainstream as the Hammersmith Odeon seemed wrong, and they were as surprised to be there as anyone ...

POP AND NOISE no longer collide for the Pixies; on the new album, Bossanova, they mutate into new beasts. The feedback and vocal frenzy of ...

Surfing With The Aliens: The Pixies

THE KIDS AT England's annual Reading festival are a scruffy lot. A ‘90s hybrid of hippie and punk, they wear tie-dyed T-shirts, asymmetrical hairdos, jeans ...

Are Pixies Ready For Stardom?

Report and Interview by Jim Sullivan, The Boston Globe, 23 November 1990

THEY HEADLINED the three-day Reading festival in England earlier this year, getting paid $65,000 to play their off-kilter rock 'n' roll to 50,000 fans. ...

Three years ago, the irrepressible Pixies set the rock scene buzzing with their howling, primeval sound. In 1990 they stepped from this murky past and ...

"OH, DON'T print this," Black Francis says, in a gentle voice, catching himself midway through a tell-all about a one-time Spider From Mars. "What if ...

Ungodly and oh so grungy ...

The Pixies: Road To Gnomewhere

BOSTON'S PIXIES have already ascended close to stadium status judging from their recent triumph at Crystal Palace. Yet their mounting success betrays no loss of ...

THERE WAS A time when the Boston group the Pixies was the last word in rock-and-roll bacchanalia. ...

Doing the slam: Tales from the mosh pit, where rock 'n' roll is a contact sport

Report and Interview by Jim Sullivan, The Boston Globe, 23 February 1992

THESE DAYS, rock 'n' roll has become a contact sport. Not all rock 'n' roll, of course. You won't see slam dancing at a Moody ...

Off stage, the band's Black Francis is a regular Joe who bears the cult-rocker's burden of mythology with a shrug and a smile. ...

The Pixies: Death To The Pixies

The Pixies: grievous, greedy and groundbreaking ...

The Pixies: Death to the Pixies

THE DOUBLE BILL looked great on paper: the Pixies and Throwing Muses at Avalon. Actually the Lansdowne Street club was called Metro then, back in ...

HELLO – September 1986 CHARLES [FRANCIS] and I were suite-mates rather than room-mates at the University of Massachusetts. Like me, he'd gone to college in the ...

Come On PilgrimSurferrosaBossanovaTrompelemonde Boston scree party: incredible back catalogue from the precursors of grunge ...

IN 1987, BACK when alt-rock was called "college rock," the Pixies loomed large, like a bizarre crossbreeding of pop sensibilities, art-rock conceptualism and nasty guitar ...

EXACTLY HOW much this, the first UK night of the Pixies' reunion tour, means to the crowd is shown when they walk on stage to ...

The Rebirth of the Pixies

Why Your Favourite Band Should Split Up

From the Pixies to the Zombies, Jude Rogers talks to the bands who chose to burn out, not fade away ...

The Pixies: Looking back on Doolittle and the making of a classic

Retrospective and Interview by Rob Hughes, Classic Rock, May 2014

30 years after the Doolittle album took The Pixies from obscurity to alt.rock's top table, the band Kurt Cobain wanted to be in look back ...