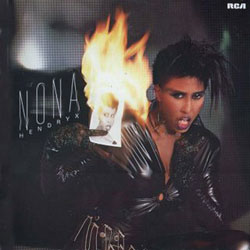 MORE THAN any other vocal group, CBS's Labelle have thrived on that old cosmic image. They deal with grand themes as deftly as if they ...

Nona's Found Her Piece Of The Rock

Nona Hendryx talks about her first solo album since the break-up of Labelle ...

PETER GABRIEL used to the the guy behind the make-up, behind the monster-mask, behind the smokescreen; an original performer, a one-man spectacular. I admired but ...

NONA HENDRYX possesses all the lumps and bumps, (in abundance), in all the right places, and flaunts her curvacity in a performance which promises sexuality ...

Nona Hendryx: Labelle-d By The Funk

IN A BUSINESS where the term "veteran" can be applied to acts that have been consistent chartmakers for at least five years, it is a ...

YOU KNOW Nona. Along with Patti LaBelle and Sarah Dash, she was part of LaBelle. ...

FROM HER early days with Labelle doing cover versions of the likes of 'Won't Get Fooled Again', to her collaborations with Talking Heads, Bill Laswell ...

NONA HENDRYX emerged from post-LaBelle limbo as a member of Talking Heads' big Remain in Light band. On The Heat, her fourth solo album, she ...