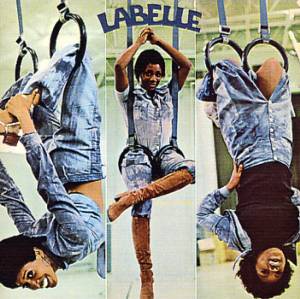 SOME KEY ITEMS – a barrier breaking (‘first blacks’) performance at the Metropolitan Opera; the anthemization of ‘Lady Marmalade’; Nona Hendryx's proud lesbianism – have ...

Ms Hendryx looks back at the formation, encouraged by Vicki Wickham, of LaBelle from the ashes of the Bluebelles; their new image, stage show, and groove. She also talks about going solo and her first album.

Vicki Wickham: The Secretary That Roared

I'D CONSIDERED doing this piece since mid-June. So, frankly, when the time came, I was thoroughly prepared. Prior to my interview with Vicki Wickham, I'd ...

THE IDEA of wedding an English or other foreign fan's perspective on the idiom with a fading American rhythm-and-blues group looks fine on paper, and ...

SOUL! NONA Hendryx of Labelle, a group of three young black women that has been together more than 10 years, gets this sweet look on ...

Labelle: Dinner and cards with Reggie

"I REMEMBER the time," says Sarah, "when we toured in England and Bluesology backed us. And Patti used to play cards with Reggie — Elton ...

LaBelle: It Happened In Hollywood

IT HAPPENED in Hollywood.To be precise it happened on The Cher Show. ...

"THE RE-VO-LU-SHUN...will not be televaaaaaazed," declaims Patti LaBelle, staring into the audience from the stage of the Congressgebouwe in the Hague. ...

LIFE HAS changed for Mickie Most since he appeared as one half of The Most Brothers, "England's answer to the Everly Brothers". Forsaking the duet ...

LABELLE ARE fashionable. They have a top ten single and album in the States, yet in Britain — nothing. As I said Labelle are fashionable. ...

THE PROVERBIAL BREATH of fresh air. ...

PATTI LABELLE, Nona Hendryx and Sarah Dash. The Ordettes and Del Capris came together in the early sixties to form Patti LaBelle and the Bluebells ...

Marshall Sehorn: The Night They Drove Lee Dorsey Down...

MARSHALL SEHORN had to get him out of jail. ROGER ST. PIERRE raps to one of the mainmen of New Orleans soul. ...

LaBelle: ...How The West Was Won — Nearly

A few days in the life of LaBelle. Penny Valentine reports from America's West Coast where the critics are a harder nut to crack than ...

Report and Interview by Robin Katz, Let It Rock, July 1975

1. 'What Can I Do For You?' PHILADELPHIA, Pennsylvania. November 1974. Breakfast time (10:30). Patti LaBelle, Sarah Dash and Nona Hendryx are sitting in one corner of ...

FOR ALL PRACTICAL purposes, Phoenix is Labelle's third album. Forget anything prior to Pressure Cookin': those albums were by some other people and are of ...

HAVING EXHAUSTED the "Motown Sound" in the sixties, soul music is now dominated by the "Philly Sound" — a triumph of polish and strings. True ...

MORE THAN any other vocal group, CBS's Labelle have thrived on that old cosmic image. They deal with grand themes as deftly as if they ...

Patti is happier with her latest album than with anything she has ever done before, and feels that producer Skip Scarbrough has captured the real, ...

THE 18 CHORUS members of Your Arms Too Short to Box With God were assembled like a church choir in their red and white gowns ...

Retrospective and Interview by Caroline Sullivan, The Guardian, 30 November 1999

She's managed stars from Dusty Springfield to Marc Almond and has just won an award for her lifetime's work in the music industry. But outside ...

Patti Labelle and the Blue Belles