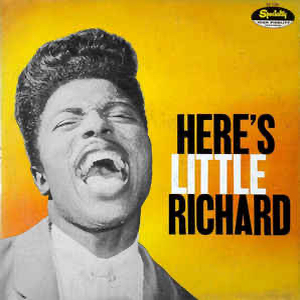 THE DEBUT DATE of Little Richard's UK tour at the half empty Lewisham Odeon was little short of a disaster. Possibly the person least to ...

THOUGH HE RECORDED for several other labels in his career, the few years that Little Richard spent with Art Rupe's Specialty Records were to provide ...

The Bronze Liberace looks back at songs like 'Tutti Frutti' and 'Good Golly Miss Molly'; the Beatles' cover of 'Long Tall Sally'; recording in New Orleans; Miss Ann Johnson and her Tik Tok club in Macon, Ga.; touring in the '50s and his outrageous stage act; appearing in movies such as The Girl Can't Help It; finding God in '57; returning to rock'n'roll in '62 and befriending the Beatles; on why young black audiences aren't interested in him; the Black Panthers, Black Muslims and racism, and his long experiences of police harassment...

Little Richard on the demonic nature of Rock'n'Roll of which, nonetheless, he is King; on how he came out of the American South; on Otis Redding and much more. Hear him sing!

Little Richard, on the 'phone, talks about race, religion, Good Works, the original giants of rock'n'roll, and Prince and Michael Jackson

THE OPENING night of the Duane Eddy/Little Richard/Shirelles tour was a lot better than most people expected at the Regal Edmonton, 2nd performance on Saturday. ...

Little Richard: A Living Legend In His Time

"THEY'RE THE greatest guys I ever worked with in my life... they're down to earth! People haven't really heard the Beatles yet. They are one ...

The stars single out the new singles ...

Little Richard has recently achieved considerable publicity and one may assume that Brian Epstein nudged the Press and ITV into action. However it was caused, ...

Little Richard: Ripping it up, Past and Present ...

LITTLE RICHARD is coming to Detroit along with Jerry Lee Lewis. They'll be at Cobo Hall Sept. 6. ...

I DIDN'T GET to see Little Richard at the Atlantic City Pop Festival where he followed Janis Joplin and revived his own legend, but when ...

AS INCREDIBLE AS IT may seem, Little Richard is as great as he says he is. His new album, the first in three years, is ...

'Bronze Liberace' Has Some Unusual Ideas About the State of Music — and the World ...

ST MARK'S PLACE, the high street of New York's East Village, hums with memories these days. Among them, at the new year, was little Richard, ...

CLEVELAND – "I'm going to tell Elvis what you did for me, hear?" Richard whispers to the stewardess as she leans over to deposit two ...

THERE IS NO way to make great rock music from retirement. Paul McCartney may have been seduced — by reading that he's equalled Schubert — ...

Little Richard: King Of Rock 'n' Roll/Various Artists: This Is How It All Began

PERHAPS IT'S just that I'm a bit too fussy, but basically I don't like going to see live gigs of the artists I admire. Too ...

"UH, HOWdo you do. Mr. Penniman, it's a great..." "HALLELUJAH BROTHER it's great to be here in your wunnerful country. I want y'all to know ...

OOOWEE, Lawd knows it was a bad night's work. According to the divine plan, the Wembley crowd should have been blowing kisses at the Georgia ...

Keep On Rockin': Interview with film director D. A. Pennebaker

KEEP ON ROCKIN' is in town, and so is the rock film revolutionary who created this celluloid spectacle of Bo Diddley, Jerry Lee Lewis, Chuck ...

HE CALLS HIMSELF the Georgia Peach, the Bronze Liberace and the King of Rock and Roll. Little Richard calls himself a lot of things. Some ...

Is This the Start of A WOPBOPALOOBOPALOPBAM BOOM?

AT IRREGULAR intervals throughout the 20 years since he cut about a dozen of the greatest rock'n'roll records ever made, Little Richard has re-re-recorded the ...

Report and Interview by Vernon Gibbs, The Village Voice, 10 August 1982

THE FIRST time I encountered Little Richard, his face was plastered against a Bedford-Stuyvesant wall — the poster advertised a show at the Breevort Theater. ...

LITTLE RICHARD Penniman is one of rock's greatest legends. If you're interested in his past, you'd be well advised to read his new biography, The ...

Little Richard: The King and Queen of Rock 'n' Roll

YOU CATCH sight of him across the Hilton's gaudy foyer, an ordinary enough black man in track-suit top, tuxedo pants, and matted wet-look coiffure. ...

Even God can do better with Little Richard on his side

GOD ALWAYS addresses Little Richard by name — it was the same with Moses and the prophet Samuel and St. Paul. ...

SOLOMON BURKE looked more like Don Corleone surveying his domain in The Godfather than a preacher preparing to conduct a recent late-afternoon service. ...

Little Richard was wearing make-up and singing pervy songs and shocking audiences before Prince or Sid Vicious or Martin Degville were even born. "I'm a living legend!" ...

Little Richard: "I Am The Rill Thang!"

GOOD GOSH A-MIGHTY...it's Little Richard. A little fuller in the face, a little thicker in the waist, but there he is in a Mayfair Hotel ...

Written by: Dorothy La Bostrie and Richard PennimanProduced by: Bumps BlackwellRecorded in: New Orleans in September 1955 ...

THERE'S NO QUESTION that some rock icons learned how to do what they do by watching and hearing Little Richard, from the cascading "whooo's!" on ...

The sultan of frutti on the Devil’s music, Pat Boone and the best hair pomade. ...

The Early Days of the "Rock 'n' Roll Comeback" Album

WHEN THE album-rock revolution hit full force in 1967, blues veterans were immediately in a great place to benefit. Revered by the new, young rock ...

I AM NINE years old, watching Don't Knock The Rock in High Wycombe's Rex cinema, when I make a connection between music and the way ...

The Domino Effect: How One of Toronto's Most Iconic Rock Concerts Almost Never Happened

Little Richard: Directly From My Heart – The Best Of The Specialty & Vee-Jay Years

Billy Vera: Rip It Up – The Specialty Records Story

ONE OF THE most important independent post-war record labels, Specialty is up there with Chess, Modern/RPM, King, and Atlantic. ...