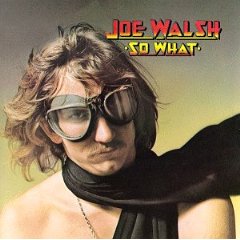 Joe Walsh: So What

WHAT A DISTRESSINGLY large percentage of the perfect strangers with whom I happen to chat while waiting in line for ball games, premieres of motion ...

Joe Walsh: The Smoker You Drink, The Player You Get

MAY I TAKE just a couple of seconds to make my position clear? I thought, and still do, that the James Gang were a very ...

THINGS ARE starting to happen for Joe Walsh. In the corridors of rock and roll where informed people discuss what, where and when, elbows are ...

Top-rated guitarist JOE WALSH – due in Britain in June – talks to Chris Charlesworth in Iowa ...

Joe Walsh: So What

As he's moved westward – from the East Coast to Ohio to Colorado to Los Angeles–Joe Walsh has assimilated one regional rock style after another. ...

LOS ANGELES: Through his work with the James Gang, Barnstorm and more recently with his solo endeavours, Joe Walsh has earned the respect and recognition ...

Joe Walsh: Lonely In The Spotlight

JOE WALSH is curiously indifferent about success. He gives you the impression that he has long outgrown awkwardness, but has never gotten used to felicity. ...

JOE WALSH plays with the grace of George Harrison and the vehemence of Pete Townshend, a combination which earmarked his playing as lead guitarist of ...

IT'S A BIT disconcerting when you're having a perfectly innocent conversation and the guy you're talking to suddenly brandishes a knife beneath your nose. Not ...

Joe Walsh: You Can't Argue With A Sick Mind

LIVE ALBUMS are by rule deadweight, redundant renditions of songs better performed and recorded in the studio. Only the Who with their essential Live at ...

THERE CAN'T BE too many people whose surnames have eight letters, none of which is a vowel, but it hardly needs to be said that ...

In 1969, The Who toured Britain, dragging around a support act who were, to say the least, an unknown quantity to all but a very ...