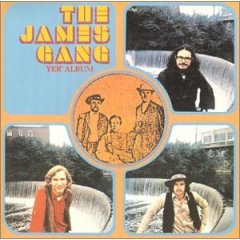 PETE TOWNSHEND, who usually has an eye and an ear for the musically arresting and is no man to argue with, could be said to ...

CLEVELAND – "I'm going to tell Elvis what you did for me, hear?" Richard whispers to the stewardess as she leans over to deposit two ...

By no exertion of the imagination are James Gang the greatest rock and roll band ever to walk the face of the earth or anything ...

James Gang Ride On Their Own

IT WAS through the auspices of Pete Townshend that the James Gang toured Britain with the Who last year. They made some impact, but suffered ...

IT'S USUAL procedure to interview Americans as they come into the country – not as they're going out. ...

"Hey Jesse, Jesse, I wuz jus' down at Molly's Tavern and Johnny Clay was tellin' me 'bout this band of desperados a-callin' themselves after us! ...

THE JAMES Gang is currently suffering from the growing pains involved in a major personnel shakeup. The loss late last year of Joe Walsh, the ...

JOE WALSH plays with the grace of George Harrison and the vehemence of Pete Townshend, a combination which earmarked his playing as lead guitarist of ...