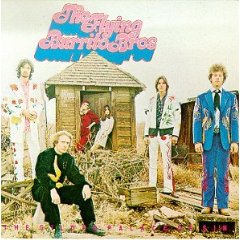 "I guess you could say our thing is a condemnation of everything that is false and deceitful in our society." — John Sinclair, of the ...

Burritos and Byrds: A talk with Gram Parsons and Chris Hillman

THE FLYING Burrito Brothers, in their own bittersweet honkytonk way, have become the subject of much foolish controversy. Hailed by numerous critics, fans, and even ...

WHAT IS the world coming to when the Jefferson Airplane, Crosby, Stills, Nash & Young and the Grateful Dead get cut to pieces by a ...

LOS ANGELES, Tuesday: Gram Parsons, founder of the Flying Burrito Brothers, was a Byrd, a southerner and a Harvard College Drop-out. With the formation of ...

Chris Hillman: The Byrd who found his wings and began to fly

Chris Hillman looks back on the Byrds and talks about his 'Brothers' ...

The Flying Burrito Brothers : Last of the Red Hot Burritos

The fourth – and presumably last – album of the Flying Burrito Bros. is, as it were, a departure. Not only is this album live, ...

Flying Burrito Brothers: After The Burritos

Retrospective and Interview by Jerry Gilbert, Let It Rock, October 1972

BY THE TIME rhythm guitarist Gram Parsons left the Byrds shortly after the release of their monumental Sweetheart Of The Rodeo album, country-rock had become ...

This is the man Presley's musicians turn to when they're sick of those Las Vegas riffs. ...

THE FIRST double album in rock that I remember was Blonde On Blonde, and to this day it is one of the few which really ...

Gram Parsons: Take Your Partners and Away You Go (One Step back Two Steps Forward)

ZZ: HOW DID you come to be part of the whole related family of Los Angeles musicians? You actually come from Michigan? ...

Flying Burrito Brothers: Sneeky Pete And The Return Of The Flying Journeymen

"ASK THEM abouta da name. They gotta no right to use it!"Don't worry, friends, my esteemed Italian colleague doesn't really speak like that, and his ...

LOS ANGELES — If tradition in music is meaningful in any way, it is because performers can emerge and fade, groups can split up and ...

IN CONTRAST to the pure country of Gram Parsons' seminal early Seventies solo albums, GP and Grievous Angel, his work with the Burritos at the ...

Twenty-five years ago, Gram Parsons died in a remote desert motel, the victim of a prodigious appetite for drugs and alcohol that shocked even Keith ...

ALTHOUGH THEY fit neatly into the silver-stitched seams on the patchwork quilt that became the country-rock heritage centre, The Flying Burrito Brothers were neither as ...

THERE ARE FEW figures in the history of popular music who have been eulogised or mythologised as much as Gram Parsons. It's to be expected ...

AS PEDAL STEEL guitarist with the Flying Burrito Brothers, Sneaky Pete Kleinow probably did more than any other musician to establish that instrument in rock ...