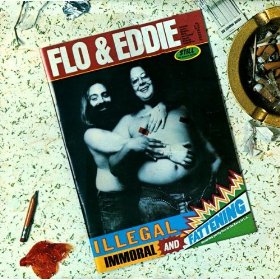 Howard Kaylan: Mother Was A Turtle

LOS ANGELES – Working in the Turtles, working in the Mothers, it's all the same, Harold Kaylan says. But he has undergone a transition nevertheless. ...

MR. HOWARD KAYLAN and Mr. Mark Volman are a somewhat literal-minded pair. When they originally left the protectve aegis of Frank Zappa to strike out ...

EDITOR'S NOTE: After many months of intensive negotiations with his career advisors and financial counselors, Phonograph Record Magazine is pleased to announce the acquisition of ...

Flo & Eddie's second album is a much more complex undertaking than their first and for the most part it succeeds admirably. Where Kaylan and ...

WHEN WE LAST left our heroes Flo and Eddie (PRM September '73), they were poised on the brink of substantial obscurity. ...

From the Turtles via the Mothers and T. Rex to their own radio show. Chris Charlesworth meets Flo and Eddie in New York ...

PERHAPS THE MOST absolutely heart-rending of the many touching moments provided by Flo & Eddie during their show at the Roxy came early in the ...

IN THE SPIRIT of fair play which should be utmost in our minds this Bicentennial year, PRM sent invitations to a wide spectrum of rock ...

INSIDIOUS. Here we have the mainspring of the Turtles, Mark Volman and Howard Kaylan, with an album that contains two songs (‘Rebecca’ and ‘Let Me ...

Flo & Eddie Post-Turtles: So Snappy Together

ON THE ROAD IN INDIANA – "Shit," laments Howard Kaylan (Eddie), whose long silver hair and gray beard give him the appearance of a lecherous ...

SO WHAT WOULD you do if you were Howard Kaylan and Mark Volman? ...

Flo and Eddie and Marc, Frank and More

THEY WERE THE VOICE of the American 1960s, sainted providers of the angelic harmonies and grooved-out choruses that served up the most innocent psychedelia your ...

Zappa And The Mothers – The Flo And Eddie Years

BETWEEN MID-1970 and the end of 1971, Frank Zappa was at his peak as rock’s premier satirist and spokesman, an 18-month period during which he ...