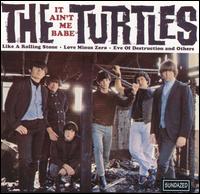 THERE IS AN unfortunate situation which reoccurs much too often in the recording business. A group or an individual makes a record and it's a ...

HOLLYWOOD: The hot, cigarette-stale air belched out of the Whiskey and onto the Strip. The sardine-like inside of the club drew its breath from the ...

The Turtles: From Machine to Group

SOME OLD friends of The BEAT's have come up with another huge hit — their fourth, fifth, sixth or seventh, depending on what part of the ...

Enter The Turtles — Part Of The... Flower Power Generation!

WHETHER THERE is a slight lack of introspection among the British pop groups is a point that always arises after meeting "an average American group." ...

Howard Kaylan: Mother Was A Turtle

LOS ANGELES – Working in the Turtles, working in the Mothers, it's all the same, Harold Kaylan says. But he has undergone a transition nevertheless. ...

FLO & EDDIE are well-known (if rather rotund) figures; their supporting role in the colossal Alice Cooper psychodrama alone assured them a massive national audience. ...

The Turtles: The Turtles (Happy Together Again) (Sire)

ITEM: THE Turtles' It Ain't Me Babe album cover was one of the first to recognize and promptly display rock 'n roll fatty tissue, at ...

Retrospective by Tom Hibbert, History of Rock, The, 1982

While they produced some of the best pop music to emerge from California during the mid to late Sixties and had 16 American hits in ...

The Turtles: Happy Together: The Very Best Of (Shout Factory)

SPURRED INTO ACTION by Beatlemania and making their chart debut with a Bob Dylan cover, there initially wasn't a huge world of difference between The ...

Wheelchair Legends: How Some Rockers Grow Old Gracefully and Others Do Not

PUYALLUP, WA – Are there gatherings like this anywhere outside of the modern American West? A million people come to a converted dusty field over ...

The Turtles: The Raunchiest Band of the '60s?

EVEN THE MOST voracious reader or rock-music biographies and autobiographies would be hard-pressed to find a better opening sentence than Howard Kaylan, lead vocalist of ...