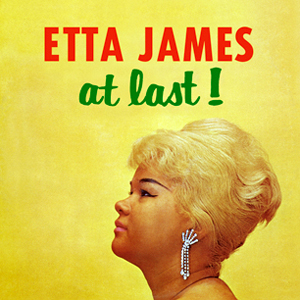 MOST EVERY year now Ms Jamesetta Hawkins – Etta to you – will at the behest of Dingwalls Boss (Goodman, that is) fly over ...

Etta takes us from 'Roll With Me Henry' to the present day: Johnny Otis; Modern Records and the Biharis; the move to Chess Records and hitting with 'All I Could Do Was Cry'; the end of Chess and working with Rick Hall, and the almost complete absence of royalties in her hit-making days.

ANYTIME THE American media welcomes a new act with such an overt display of scraping and bowing for superlatives, it's time to be suspicious. ...

Etta James: Deep in the Night

ONCE, WHEN I WAS FOURTEEN, I bought a copy of "My Dearest Darling" by Etta James, a record I'd heard as an oldie on a ...

This is a transcription of Cliff's audio interview with Etta. Hear it on the site here. ...

THEY PROBABLY don't realise it but The Who once dedicated an album to Etta James. Meaty, Beaty, Big And Bouncy it was called, and by ...

IT IS A cruel irony that had she not been a junkie for thirteen of her forty years, Etta James would probably still be working ...

Soul Punk Etta: Superstardom the Hard Way on a Dollar a Day

"THANKSGIVING DAY in November will be my silver anniversary: 25 years since I cut my first record and I haven't become a superstar yet. It ...

Having licked a serious drug problem, Etta is climbing to the top again and has been delighting audiences on the road with the Rolling Stones, ...

YOU CAN ENJOY Etta James as a throwback to the rockin' Fifties. You can admire her as the apotheosis of Sixties soul performing ghetto clubs ...

Etta James, a star of this year's Montreux Jazz Festival, visited London after her show there en route for her American home. While here, she ...

A YEAR AGO, Etta James stopped time as surely as if she had point-blanked a Timex with a .357. ...

Etta James: Her Voice Can Get A Hold On You

"WHAT'S HAPPENING now is that all the kids who grew up listening to me on their transistor radios in the '50s and '60s are now ...

"SHOW BUSINESS became a lifestyle for me from the beginning," says legendary vocalist Etta James. "The road became my home – I was almost like ...

Etta James: Mama tells us all about it

WHEN ETTA JAMES was a 17-year old glamour puss with drug-store-peroxide blonde hair and a lewd rock 'n' roll hit called 'Roll With Me Henry' ...

Etta James has sung and lived the blues, but these are good times for the R&B matriarch bound for the Rock and Roll Hall of ...

Etta James: The Time Of Her Life

With her new Jerry Wexler-produced The Right Time album showcasing Etta James at the pinnacle of soul creativity, the lady talks to Roger St. Pierre ...

THERE IS no greater living blues singer than Etta James, and no producer more attuned to the right setting for a blues diva than Jerry ...

ETTA JAMES is a big, big lady, with a big, big voice — and she certainly made full use of her lung-power in wowing her ...

ETTA JAMES WAS just 21 years old when she came to Chess Records in 1960, but she was a seasoned show business veteran with six ...

Etta James: Matriarch Of The Blues

Magisterial readings of blues and soul classics from the folios of Otis Redding, Al Green, and O.V. Wright, with a dash of Dylan and a ...

I CALL THEM anachronauts: performers whose core appeal stems from their ability to transport listeners to another time and place. ...

JOHNNY OTIS was relaxing in his San Francisco hotel room one afternoon in 1954 when his manager called from the lobby and said he was ...

Abandoned as a child, addicted as an adult, Etta James lived a life punctuated by self-destruction and "wrong-headed men". Then came redemption. As the first ...