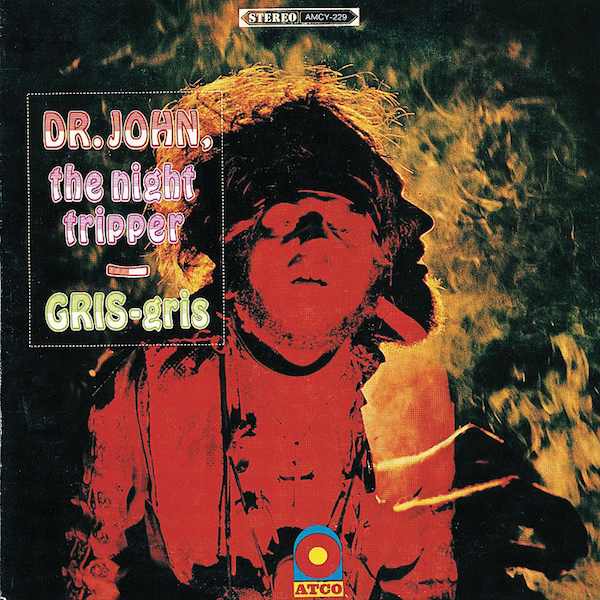 WIPE YOUR MIND clean of all you have ever heard and read about Dr. John the Night Tripper. If you knew that once he was ...

Dr. John at the London Forum

COMPARED TO his tremendous gigs at Ronnie Scott's a year or two ago, when Dr John was accompanied by a horn section that included Alvin ...

From scuffling in the clubs and studios of late-'50s New Orleans, to his reinvention as Dr. John in mid-'60s L.A., Mac Rebennack tells the whole story - the gangsters, the drugs, the hard times and the high times. And, of course, the music, always the music.

Kick back around the piano and let Dr. John and Jerry Wexler take you back to the R&B glory days of New Orleans: 'Fess, Guitar Slim and many more. (And be patient; Wexler becomes audible after a few minutes!)

The erstwhile Night Tripper on writing his autobiography Under a Hoodoo Moon; on the New Orleans music business — the rip-offs, lousy studios, useless Musician's Union, Jim Garrison; on his new album Television; on drugs and recovery; on moving to New York City; on the modern recording scene (and being sampled by Beck); on his early involvement in N.Y. hip hop... and how he started out just playing for fun.

The erstwhile Mac Rebennack goes through a lifetime in music from New Orleans, via Los Angeles, to the world: the music, the drugs and the whole cast of characters, including James Booker, Doc Pomus, Phil Spector, Allen Toussaint and Sam Cooke.

THE ALBUM of huge underground word-of-mouth reputation in the States these days, an album far removed from the fashion changing ladder of the high chart ...

How Do Voodoo, I'm Doctor John

DR. JOHN The Night Tripper is an original. Claiming to be a high priest of voodoo, Mac Rebennack (his given name) is also one of ...

Behind the Scenes with Harold Battiste

FREQUENTLY, we receive letters from readers' asking us to write about the people behind the scenes in our music. For example, the features we did ...

Dr. John From Way Down Yonder in New Orleans

DR. JOHN'S contributions to pop music have been highly original and creative. Even if he claims that all the credit is due to the music ...

Profile and Interview by Mike Jahn, Baltimore Sun, 7 May 1972

DR. JOHN inspires weirdness in those around him. Witness the press bio released by Atlantic Records: "...open a door into SHOOW HEEEH's lamblam another consciousness ...

Retrospective and Interview by Richard Williams, Melody Maker, 20 May 1972

DOCTOR JOHN is The Night Tripper, purveyor of Gris-Gris and Voodoo since 1967. ...

Dr John: The Mind And Music Of A Delta Voodoo Rocker

ACCORDING to Dr. John almost everything started in New Orleans, from rock and rail to rhythm and blues to himself. ...

GUMBO IS DR. JOHN'S fifth album, but it seems like his first. For once, the record and the recording both feel right, as though they ...

Dr John: In The Right Place

Dr. John: In The Right Place

MAC REBENNACK'S situation is Jekyll and Hyde reversed. Mac took something and turned into the Doctor, split from his identity as a New Orleans songwriter/session ...

Dr. John: In The Right Place

PACK UP the voodoo, stash the gumbo, 'cuz Dr. John has gone legit. Used to be a time when he was Numero Uno Witch Doctor. ...

Retrospective and Interview by Charlie Gillett, Let It Rock, June 1973

BY THE TIME you read this, Dr. John's 'Right Time, Wrong Place' will probably be in the American Top Ten. Which will be mighty gratifying ...

Retrospective and Interview by Charlie Gillett, Let It Rock, July 1973

COULD THAT possibly be Mac Rebennack peeping through the Dr. John persona? Just like, say, Sly Stone and Sylvester Stewart. ...

MALCOLM JOHN Rebennack is a New Orleans musician who has played on more sessions than he or anyone else can remember. In 1968 his first ...

ON THE broadwalk at Asbury Park, New Jersey, you can hear the black waters of the Atlantic rippling against the rotted sides of the pier ...

THE KING OF VAUDEVILLE FUNK NODS OUT ON NICK KENT ...

From Gris Gris to Gumbo to the Top of the Charts, with "goofer dust an' powders an' oils an' sachets an' lotions an' candles an' ...

WHEN DR John was coming off heroin some time ago, it was suggested that a visit to a faith-healing meeting might help in the cure. ...

Dr. John: Cut Me While I'm Hot and Hollywood Be Thy Name

The Meters and Dr John: Walking to New Orleans

WHILE UNIVERSALLY acknowledged as one of the birthplaces of jazz, New Orleans has never received its due as a rhythm and blues center in the ...

WHEN DOCTOR John failed to deliver a hit single (and album) to follow the success of 'In The Right Place' Atlantic promptly ditched him. That's ...

WELL, IT WAS the summer of '74 and all in all life was reasonably comfortable but pretty boring. Home was the spacious second floor of ...

THIS INTERVIEW TOOK place on Dr. John's tour bus right before a show at the Bijou Café in downtown Philly.  I'd been a fan of ...

DR JOHN is clean (and mean) and on the scene; so Hail on Mac 'cause it's a stone fact (y'all), the gritty gumbo hustler's back. ...

THESE TWO volumes, together with the indispensable Huey "Piano" Smith and the Clowns collection in the same series (Ace CH 9) represent the first time ...

AS THE TITLE implies, this is Dr. John being himself, stretching out on the piano and doing what comes naturally. At the same time, there's ...

The legend of Dr. John and his gumbo ragtime voodoo funk medicine, as told by the man who invented him, lived him and let him ...

BACK IN New Orleans in the '50s, when he was one of the few white people involved in one of the last great watersheds in ...

THERE ARE GROOVES and there are grooves: that which is laid down by the Meters is definitely one of the latter. ...

Nights For Trippin' With Dr. John At The Lingerie

DR. JOHN SHOULD feel right at home this weekend at the Lingerie in Hollywood. ...

FUNNY OL' game the record business! First, we have the triumphant return of the Neville Brothers to the A&M stable after a ten year absence ...

DR. JOHN AND New Orleans. Although the legendary pianist has made New York City his home for almost a decade now, his name still conjures ...

John Sinclair: First things first: everybody wants to know who did your hair for the record cover of Television? ...

MAC REBENNACK'S music continues a 40 year long mardi gras of the mind, a sound that never gets old, never gets tired. ...

IF THIS COMPILATION ULTIMATELY fails to live up to its title, it's at least partly due to the strain of trying to encapsulate a career ...

Doctor John: An Incantation to the Jollamallawalla Gods

A QUARTER OF A CENTURY HAS PASSED SINCE MALCOLM Rebennack, trading under the sinisterly exotic stage name "Dr John The Night Tripper", descended the steps ...

Memoir by Al Aronowitz, Blacklisted Journalist, The, 1 May 1996

I. NEW YORK, October 27, 1971 Emmett Grogan sent Tuesday Weld home early. He didn't like all the publicity that was going around about the two ...

The Return Of The Native: A Conversation With Dr John, The Night Tripper

DR. JOHN IS as much identified with New Orleans as gumbo is. In a May '97 interview with FI magazine, Dr. John, "Mac" to his ...

MAC REBENNACK, IS SLUMPED ON A chaise longue in an elegant London hotel suite, the ubiquitous walking cane by his side, a straw Homburg tilted ...

The Doctor and the Duke: A Night with Mac Rebennack

ON A WARM Saturday afternoon, in a studio just off 5th Avenue, in the downtown section of New York, Dr John is recording an album ...

DR JOHN'S LONG journey to this concert hall has been faltering and nearly fatal. Born Mac Rebennack in New Orleans, he is as steeped in ...

Shopped by Zappa, hooked on heroin and chased by the Feds, Dr. John dodged death and digit loss to become New Orleans' "fonk" ambassador in ...

Wade In The Water: Dr. John Weathers the Flood

THERE IS no native son of New Orleans more fiercely native than Mac Rebennack, known professionally now for almost 40 years as Dr. John. ...

Eric Clapton: The Return of God

To the faithful, Eric Clapton's guitar playing has always been sacred. But in 2008, from a Blind Faith reunion to a host of blazing session ...

TO LIVE AND BREATHE in the sketchiest part of the Quarter...to hustle and flow, to let go... to get saved and find a funky kind ...

FROM HIS 1968 DEBUT ONWARDS, THE MUSIC OF DR. JOHN HAS BEEN MARINADED IN THE PSYCHEDELIC VOODOO OF NEW ORLEANS. NOW, WITH A TRIBUTE TO ...