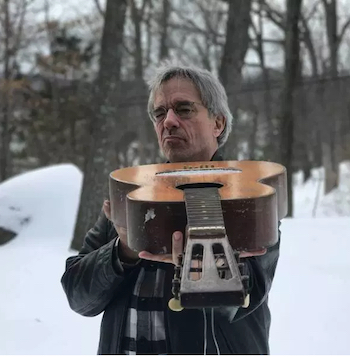 Tony Scherman has been a journalist and non-fiction author since the early 1980s. A former boss, Bill Flanagan, now Executive Vice President of MTV, wrote that "Tony Scherman is one of the best pure writers ever to come out of music journalism". He has written for dozens of magazines, and his two books are Backbeat: Earl Palmer’s Story (1999) and POP: The Genius of Andy Warhol (2009). His work has been widely anthologized.

THERE'S NO MONEY IN BEING A ROOTS-MUSIC VIRTUOSO, BUT THIS GUITARIST'S CAREER TURNED THE CORNER WHEN HE STARTED WRITING SOUNDTRACKS. ...

Charters talks about his friend, colleague and mentor Moe Asch: about starting to release his field recordings through Folkways; the importance of the label; the Harry Smith anthology; Sam Goody's support for the label; the label's bankruptcy and tax problems; Asch's brilliance, but being a difficult man to work with; the magnificent catalogue, and the scene surrounding the label.

Steve Winwood: The Lord-Alge Brothers — The First Family of Engineering

The three stooges of the studio get the last laugh. ...

The hirsute guitar wonder starts off with memories of recently-deceased fellow Texan Stevie Ray Vaughan, then discusses the new ZZ Top album Recycler... plus the trio's return to a rootsier sound; the technology used on preceding albums Eliminator and Afterburner; the place of the blues in today's music; and getting to play cards with Muddy Waters.

DID YOU ever play with Stevie Ray? Of course. [ZZ Top's] Frank and Dusty grew up with him in Dallas, and just this morning we ...

The ZZ Topper talks about his enduring love for bluesman Robert Johnson: on first hearing Columbia's 1961 release King of the Delta Blues Singers; the dark impact of his music; the aspects of mystery surrounding Johnson; his favourite songs; Johnson's superb technique and delivery; the "pact with the Devil" myth, and being given dirt from that crossroads; the newly discovered photograph of Johnson, and his hands; his impact on ZZ Top, and the blues psychogeography of the Mississippi Delta.

WHAT'S THE best way for you to write? I pick up things from people on the streets, in airports, at parties. The night before last ...

Interview by Tony Scherman, Musician, May 1992

The bedroom secrets of a drummer's hands ...

Three giants of New Orleans R&B — bandleader Bartholomew, drummer Palmer and sax player Tyler — look back on the days on the bandstand and NOLA studios: on recording with Fats Domino and Little Richard; on the characters — Lightnin' Slim, the unlucky Smiley Lewis and more; on hassles with the Musicians' Union; on Palmer leaving for L.A.; on squeezing in bebop; on the beloved Dew Drop Inn... and what made the Crescent City sound. [NOTE: The most audibly prominent voice belongs to Tyler, with Palmer's the most distant. Bartholomew's is somewhere in the middle, with the deepest register.]

Hal Blaine, Earl Palmer: A Vote for the Hired Guns of Rock-and-Roll

EVER SINCE the Rock-and-Roll Hall of Fame gave itself the ticklish job of anointing a rock-and-roll pantheon, one of its stated goals has been to ...

EMERGING IN THE late '60s as an anomaly – one of the few young black musicians to embrace the folk-blues revival – Taj Mahal flirted ...

"THE WHITE MAN cannot vocal the blues,'' said the blues singer Muddy Waters with grave finality, and his maxim has only rarely been disproved. ...

The Chemical Brothers: Warhol: The Herald Of Sampling

MENTION ANDY Warhol's relationship to pop music, and the first name to crop up will be that of the Velvet Underground, the band Warhol championed ...

WHEN THE cellist Yo-Yo Ma, the bassist Edgar Meyer and the violinist Mark O'Connor take the stage on Wednesday at Avery Fisher Hall to play ...

Bill Monroe: Before Bluegrass, Bill Monroe Was Already a Star

IN THE 1950s and '60s, the recording studio became an instrument. From its humble origins documenting live performances, the studio turned into a music-maker itself, ...

Recorded over two sessions in 2004 (the first on 2nd March, the second on 3rd April), the Velvets' bassist/viola player goes deep into the band's relationship with Andy Warhol; the effects on Lou Reed of shock therapy; New York scenesters such as Paul Morrissey, Bob Neuwirth, Billy Name and Edie Sedgwick; the Dom and Cinematheque; the band's members and the sessions for the first Velvets album... and the end of the band's involvement with Warhol.

Our recent glimpse of Tony Scherman's biography in progress, I Gave My Heart and Soul to You: The Triumph of Aretha Franklin, told the story ...