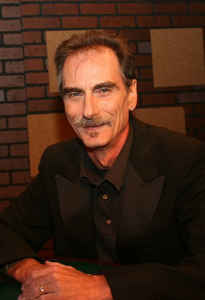 Stephen K. Peeples is a features writer and photographer for KHTS Radio News (hometownstation.com) and SCVTV’s  SCVNews.com. He also writes the occasional post for his own website and independently provides Web editorial and social media services for select clients.

On TV, Peeples was host, writer and co-producer of the popular "House Blend" music and interview show on SCVTV, community television for the Santa Clarita Valley, from 2010-2015 (scvhouseblend.com). He was the original award-winning writer/producer of The Lost Lennon Tapes radio series for Westwood One (1988-1990) and a Grammy nominee as co-producer of the Monterey International Pop Festival four-CD boxed set (MIPF/Rhino, 1992).

The Eagles: Boyd Elder: Encounters of the Southwestern Kind

A close encounter with the artist who created the skull art for Eagles' One of These Nights and Their Greatest Hits. ...

Waylon Jennings' Are You Ready for the Country

The Texas country outlaw's bid for a wider audience with Are You Ready for the Country gets a closer look. ...

ON FEBRUARY 6, Legacy will premiere a video of King's 1971 BBC live studio performance with James Taylor accompanying on guitar. The set includes live ...

Tom Waits on Heartattack and Vine

NOTE: With the appointment made to conduct a Tom Waits interview on the Zoetrope Studios lot in Hollywood on Sept. 4, 1980, I listened to my ...

SEATED AT A back table near the Golden Rooster's alleyway exit, my eyes fix a stare on the joint's '50s neon face (jukebox). Thirty years ...