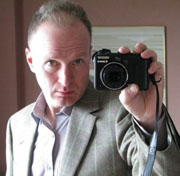 Paul Trynka is probably best-known as editor of MOJO magazine, the international bible of rock’n’roll music: he joined the title as reviews editor in 1996, overseeing it from 1999 to 2003. He has also served as Editorial Director of Q magazine, editor of International Musician magazine, and founding editor of The Guitar Magazine.

He has written definitive studies of the Electric Guitar (Virgin 1993, a co-production with London’s Design Museum), blues music (Portrait Of The Blues, with Val Wilmer, Hamlyn/Da Capo 1996) and Denim (Aurum Press, 2001) and edited MOJO’s bumper co-production with Dorling Kindersley, The Beatles, 10 Years That Shook The World (2004).

Paul has written for Elle, The Independent, The Guardian, Blueprint and many other titles, on design, fashion, music and travel, and in his previous career as a musician made critically-lauded albums for labels like Beggars Banquet and Factory, one of which reached Number Three in the charts. In Andorra. He lives in London.

"I DO INTERVIEWS every once in a while," sighs J.J. Cale, with a resigned expression. "In fact, with this new album I think I've done ...

The Stooges: Night of the Iguana

Retrospective by Paul Trynka, MOJO, May 1995

When Iggy Pop fled to New York in 1971, he was a rock pariah. Then came a notorious photoshoot and a rebirth. ...

One hundred and eighty! Minutes that is. The Artist Formerly Known As Prince gets out of his contract in triplicate. Paul Trynka, the writer formerly ...

SPIRITUALIZED'S SIMPLE, sublime Ladies & Gentlemen We Are Floating In Space has gained untold credibility by being nominated 'this year's drugs album' – a shorthand ...

The marriage of beat poetry with hip hop beats. Released in the UK on September 29 before one-off London show on October 13. ...

Portishead: You Only Live Twice

They inspired with Dummy. And nearly expired making its successor. As Portishead finally deliver their eagerly-awaited second album. Paul Trynka uncovers the turmoil behind their ...

PORTISHEAD, THE British band who spawned the trip hop genre, appear to represent the cutting edge of electronic pop, but it's the guitar of Adrian ...

Report and Interview by Paul Trynka, MOJO, May 1998

Fifty years ago B.B. King arrived in Memphis, Tennessee, and found himself in the eye of a musical hurricane. Today he celebrates the giants who ...

Ike Turner: The Importance of Being Izear: Ike Turner with Nigel Cawthorne: Takin' Back My Name (Virgin)

Leaping to his own defence, Ike makes a great witness for the prosecution ...

The Beatles: Abbey Road: Where Magic Was Made

Paul Trynka looks back at the relationship between the biggest band of all time and the studio that helped them create their sound ...

Billed as a return to his Odelay style, Beck's eighth album is at its best when striking new ground. ...

Shopped by Zappa, hooked on heroin and chased by the Feds, Dr. John dodged death and digit loss to become New Orleans' "fonk" ambassador in ...

For the first time since 1970, the Stooges play their legendary Fun House album. Paul Trynka gets loose. ...

How shy, preppy James Osterberg built himself an alter ego that would allow him to dominate, ingest and fornicate at will. And how, in turn, ...

The Rolling Stones: Everybody Must Get Stoned: Andrew Loog Oldham Speaks

ANDREW OLDHAM'S two books of memoirs, Stoned and 2Stoned, are not only vital, entertaining works on the genesis and growth of the Rolling Stones; they ...

NO SINGLE generation has a monopoly on decadence. Still, Marianne Faithfull's Swinging London and Kurt Weill's Weimar Berlin have a better claim than most. Even ...

Doubly slept-on in the annals of the unlauded, two guitar masters' fleeting fusion of ancient and modern. ...

UNHAPPY PEOPLE, a Russian once suggested, are more varied and interesting than happy ones — which makes John Grant a very special person indeed. Over ...