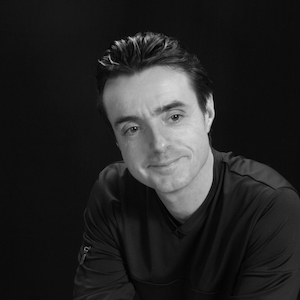 Dery is best known for his writings on the politics of popular culture in books such as The Pyrotechnic Insanitarium: American Culture on the Brink (1999) and Escape Velocity: Cyberculture at the End of the Century (1996).

About the decade (or so) he spent in the golden ghetto of rock-journo hackdom, Dery has this to say:

"As a freelance music journalist in the ‘80s, I wrestled with the cognitive dissonance of writing critical essays for art magazines on highbrow subjects such as the video artist Nam June Paik, on one hand, and on the other grinding out music-journo hackwork like "Hellbangers! Some Call It Black Metal; By Any Name, It’s The Hard, Dark Underbelly Of Rock," a story I wrote for the late, utterly unlamented Hard Rock Video magazine.

Through my interviews with artists and New Music composers in what was then called New York’s ‘downtown’ scene, I discovered British cultural studies and French postmodern theory. Media theorists such as Jean Baudrillard and scholars of fan cultures such as Dick Hebdige offered object lessons in the intellectual rewards of trespassing in the forbidden zone between high and low culture, academic theorizing and pop-culture headbanging. My interest in this sort of philosophical and stylistic gene-splicing had already been piqued by intellectually omnivorous music writers such as Greil Marcus and Lester Bangs, and by the genre-hopping, quotation-crazy East Village composers, hip-hop deejays, and 'appropriation' artists I was writing about. Why couldn’t I do, in rockcrit, what Laurie Anderson and John Zorn were doing in music? Nothing remained, I decided, but to attempt the experiment in gene-splicing cultural criticism I’d been inching toward.

Regrettably, most rock magazines, especially the gear-porn, guy-ocentric trade rags I was writing for, were deeply hostile to such post-disciplinary promiscuity. Which is why I abandoned music journalism for the arts-and-culture beat.

The articles archived here are early, misbegotten attempts at a post-Bangsian, gonzo-theory rockcrit – fossil specimens of evolutionary dead-ends. But most have some obscure charm that makes them worth a glance, at least: insights into the artistic unconscious of artists seldom covered by the mainstream press; stylistic loop-the-loops and theoretical bungee-jumps that actually work, on occasion; or, absent other merits, comic relief – not always intentional, to be sure, but isn’t that the best kind?"

Laurie Anderson Goes For The Throat

FORGET the Pippi Longstocking coyness that led Newsweek to dub her "a cybernetic Lily Tomlin." Forget the dimples and the I-had-an-argument-with-10,000-volts-and-lost hairstyle. When Laurie Anderson ...

Laurie Anderson: Home Of The Brave

A GARBAGE disposal with indigestion, glub-glubbing on a smooshed Jiffy Pop foil bubble or a gluish wad of Captain Crunch, is not a pretty sight. ...

Laurie Anderson: On The Jagged Edge

"I'LL BET you think I'm making this up," says Laurie Anderson, her voice taut, edgy. A dramatic pause, then a grave shake of the head. ...

WHEN DID I stop wanting to be Bowie? Too recently for a Man of a Certain Age is the short but sufficiently mortifying answer. ...

Glenn Branca: "Sometimes I Wished My Fist Was A Sledgehammer"

Can a microtonal man from Harrisburg, Pa., find happiness in the '80s when his music sounds like a well-tempered band saw? ...

"THERE'S not one hardcore band in this country — I don't care how good it is — that can touch Mozart for hardcore," growls Glenn ...

GLENN BRANCA and Elliott Sharp philosophize with a hammer. And an anvil. And a stirrup. The two New York composers take Friedrich Nietzsche, who subtitled ...

"THE MUSICAL landscape is completely moribund," says Gary Lucas. "It's one of the worst periods in memory, worse than the mid '70s. My music is ...

LINK WRAY — whose 1958 hit 'Rumble' sounded an early tremor of what was to become rock and roll guitar — once divulged his jerry-rigged ...

"MOST MUSIC criticism," griped Leonard Cohen in a recent Musician interview, "is...so far behind, say, the criticism of painting. Nobody is identifying our popular singers ...

FROM HIS 1967 debut, The Songs Of Leonard Cohen, to his tenth and latest release, I'm Your Man, Canadian singer-guitarist Leonard Cohen has traveled to ...

The Cure's Lol Tolhurst: A Dose Of Keyboard Fever

EVER SINCE schoolmates Robert Smith, Laurence "Lol" Tolhurst, and Michael Dempsey formed Easy Cure in 1976 – the name was eventually shortened to the Cure ...

HE BEGAN, by his own admission, tone deaf and with "no sense of rhythm." He is a spit-shined, manicured man whose "best subjects at school ...

DURING HIS RECENT So Tour, poker-faced Peter Gabriel offered fans a glimpse of his slapstick side. During 'Big Time', while Gabriel brayed in mock-macho tones ...

IF CLASSICAL music makes you think of some character in a periwig sawing away on a Stradivarius, then you've never heard Philip Glass' music. On ...

Philip Glass: Through A Glass Darkly

Composer Philip Glass has leapt to national prominence in music with his synthesized symphonies and his collaborations with artists and filmmakers. His systems-oriented work provided ...

"I THINK people were a little tired of rock and roll and disco," says singer Ofra Haza. "And suddenly, along came something very different, very ...

WHAT DO you get when you cross nursery crimes, rump-bumping beats, hooky melodies that are bittersweet as a bite of watermelon pickle, and batty lyrics ...

Hüsker Dü In Their Own Way

"In Switzerland they kept slammin' the microphone into my face and throwing beer cans at us all night. So the next person that did it, ...

Joe Jackson: Success With The Help of Will Power

He's done everything from beatinghimself crazy to jumping jive,but with his new albumthe composer has returned to the classics. ...

WHEN VOLUNTEERS are needed for the first brain chips – surgically inserted microcircuits that, the theory goes, will boost brainpower – Kraftwerk will be first ...

Keyboard: THIS IS your first tour in almost a decade. Why now? ...

"HOW NOT DUMB is Gaga?" asked the New Yorker music critic Sasha Frere-Jones, in the first flush of Gagamania. Almost exactly a year later, his ...

RICHARD LLOYD would like to wring his guitar's neck. And he tries, throttling it bluefaced on the Television records Marquee Moon and Adventure, and damned ...

Disk jockeys want nothing less than the acceptance of the lowly turntable as a legitimate musical instrument. ...

IT AIN'T THE MEAT, as they say, it's the motion, and believe me, nothing beats a handful of animated hamburger racing around on your plate ...

UNTIL NOW, British soul has meant blue-eyed soul, but 19-year-old MICA PARIS might change that. Her first album, Mica Paris, displays a seasoned, soulful voice that ...

The great guitarist and inventor talks about the basis of his style; the making of 'How High The Moon'; co-inventing The Chipmunks; his influence on other musicians; the development of sound-on-sound and multitrack recording, and pays a heartfelt tribute to Mary Ford.

Glenn Phillips' Voices In The Night

Profile and Interview by Mark Dery, Guitar Player, May 1992

THE POET CHARLES Bukowski believes that greatness is born of ordinary madness. Glenn Phillips would probably agree. In the liner notes for Echoes (1975-1985), a ...

The Psychedelic Furs: The Butler Did It

THERE'S A scene in David Cronenburg's The Fly where a baboon gets zapped, beamed from Point A to Point B, and reassembled as simian upsidedown ...

"Elvis was a hero to most But he never meant shit to me you seeStraight up racist that sucker wasSimple and plain ...

Steve Reich: "As if I were writing directly before God"

His latest and largest, Steve Reich's The Desert Music at BAM is also his most lush to date ...

Ryuichi Sakamoto: The Noise From Nippon

Sonny Sharrock: A Musician With Lightning In His Hands

Profile and Interview by Mark Dery, The New York Times, 5 May 1991

Sonny Sharrock knew his route would be rocky. ...

The king of out there guitar on everything from playing on Miles' Jack Johnson album, through to Last Exit, with absolutely everything in between.

Shriekback: The Piercing Sounds Of Shriekback

AFTER 50 YEARS IN JAZZ THE BANDLEADER FROM SATURN FINALLY LANDS A MAJOR LABEL DEAL. ...

The great bandleader and cosmologist talks about everything from being a visitor from Saturn to his spiritual home in Egypt, via much about making music, improvisation and the importance of discipline.

THEY MIGHT be Eddie Haskell and Lumpy Rutherford 10 years after, rigged out respectively with pearl-inlaid accordion and Japanese Strat. ...

THIS IS HOW the other half lives, the dark underbelly for whom being born in the U.S.A. means Huey Long, Lenny Bruce on a bender, ...

"It's like if you're an artist and they say, 'I'm sorry but you can't have your paintings displayed in public anymore.' The radio's really awful, ...

The Death of Live Music

Will concert and club dates survive in the Internet age? ...