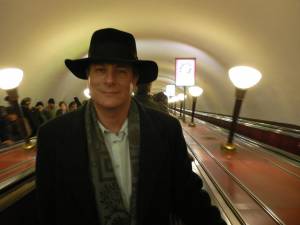 A world-class guitar hero, a Grammy-nominated songwriter and composer, an international recording artist with over 20 acclaimed solo albums to date, and a soundtrack composer for film and television, GARY LUCAS is on the move in 2011. He was just profiled in the New York Times, the Wall Street Journal, and the International Herald Tribune to coincide with the May 2011 release of his psychedelic supergroup Gods and Monsters new studio albumThe Ordeal of Civility, produced by Jerry Harrison (Talking Heads) and distributed by Sony/Red, which is receiving rave reviews everywhere–including 4 Stars in the upcoming MOJO.

Last year he made successful performing debuts in China, Cuba, the Canary Islands, Colombia, Brazil and Mexico alongside his usual relentless touring in Europe and North America. He was recently cited as one of the 100 Greatest Living Guitarists" by Classic Rock magazine (UK). His latest album, a collaboration with Indian vocalist Najma Akhtar, made #4 on the World Music Charts Europe and the pair just returned from a European tour that garnered a 4-star review in the Financial Times.
Dubbed "The Thinking Man’s Guitar Hero" by The New Yorker, "The world’s most popular avant-rock guitarist" by The Independent (UK), "Legendary Leftfield guitarist" by The Guardian (UK), "Guitarist of 1000 Ideas" by The New York Times, "a true axe God" by Melody Maker, and "One of the five best guitarists in the world" by the national Czech newspaper Lidove Noviny, the British world music magazine fRoots recently described Gary Lucas as "without question, the most innovative and challenging guitarist playing today." Rolling Stone’s David Fricke wrote: "Gary Lucas is one of the best and most original guitarists in America...a modern guitar miracle." Best-selling author/producer Dan Levitin (This Is Your Brain On Music) recently cited Gary as "the greatest living electric guitarist".
Gary Lucas tours the world relentlessly both solo and with several different ensembles, including his longtime band Gods and Monsters, whose ranks once included the late singer Jeff Buckley. Gary co- wrote two of Jeff Buckley’s most famous hits, "Grace" and "Mojo Pin", which opened Jeff’s double platinum Sony album Grace, which MOJO magazine named the #1 Modern Classic Rock Album.
Gary continues to lead his longtime NYC-based band Gods and Monsters, a psychedelic super-group based around Gary’s guitar playing, singing, and songwriting, featuring Billy Ficca (Television) , Ernie Brooks (Modern Lovers)., Jason Candler (Hungry March Band) and Joe Hendel (Gods and Monsters). They recently played a Live Nation sponsored 20th Anniversary Show in NYC, and have a new live DVD and studio album wrapped, produced by Jerry Harrison (Talking Heads) due out in spring 2011.

THE YARDBIRDS have the dubious distinction of being the group that every major English guitarist has left. Perhaps their best asset was the one who ...

IT MUST be said — Jimmy Page is the most successful ex-Yardbird of the three lead guitarists, Eric Clapton and Jeff Beck being the previous ...

Humble Pie, The Kinks, Pink Floyd, Renaissance, The Small Faces: The Record Rapper: All the way to the West, by God, Virginia (Like, how obscure is West Virginia, Santa Claus?)

DUE TO the recent rash release of a rasher of ratified British records, no less, this is more of the same (see last issue if ...

Take Up Thy Stethoscope and Walk ...

Captain Beefheart: Low Yo Yo-Ing It In Blunderland

JEFF BECK'S erratic career has been marked by equal touches of brilliance and downright stupidity. Nowhere is the guitarist's penchant for self-destructive behavior more in ...

ONE THING you gotta say about Robert Fripp, the auteur behind King Crimson, is that he's ambitious. After perfecting his mellotron-dominated "death of the universe" ...

TWO INTERESTING corollaries to the albums under discussion are the interviews with Daltrey and Entwistle that appear in the appendix of Gary Herman's otherwise boring ...

MUCH HAS been written concerning Ray Davies fragile state of mind with all its eccentric manifestations and how it seems to correlate to his songs, ...

Peter Green, inheritor of Eric Clapton's spot in John Mayall's Bluesbreakers and co-founder of Fleetwood Mac, was, said B.B. King, "the only guitarist who gives ...

A new doorstopper-sized (900+ pages) biography of Malcolm McLaren by Paul Gorman got musician Gary Lucas thinking about one part of the former Sex Pistol/Bow ...

Vivian Stanshall was the strikingly eccentric ringleader of the Bonzo Dog Doo Dah Band, often described as the UK's version of the Mothers of Invention. ...

Depp for Men: Scene and Not Heard

"AS A punishment of myself and as a lesson to others," wrote Ivan Turgenev after witnessing a public execution in Paris, "I should now like ...