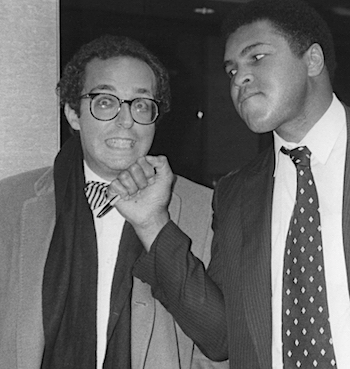 Bob Merlis (pictured with The Champ) has been a fixture in the music PR game for the better part of a half century, repping such clients as ZZ Top, Dion, John Mellencamp, Etta James, Neil Young as well as the legacies of Sam Cooke, Roy Orbison and Jimi Hendrix. His first music industry job was at the trade magazine Record World, where he ultimately served as Assistant Editor before leaving for the comparatively greener pastures of the publicity department of Warner Bros. Records in 1971.

He was with Warner Bros. for a cumulative 29 years with two "time-outs" – one at Bearsville Records and another at RCA where he worked in the A&R department for an inglorious six months. He's the co-author, with Davin Seay and forward by Etta James, of Heart & Soul (A Celebration of Black Music Style In America 1930 -1975), published by ‎Stewart, Tabori & Chang in 1997. Magazine pieces, apart from his work for Record World, include contributions to Words & Music, Oui, New West, Crawdaddy Feature, Los Angeles Magazine, LA Weekly, LA Style, Car and Driver, and Automobile. He is a contributing editor of The Catalog of Cool, edited by Gene Sculatti and published by Warner Brooks in1982 as well as Too Cool, (Gene Sculatti, editor, St Martins Press, 1993). He's written liner notes for albums by Van Morrison, Etta James, Alan Price, ZZ Top, John Mellencamp, Buddy Guy, Bobby Blue Bland, Sir Mack Rice, Louise Hoffsten and others.

WE'VE BEEN experiencing a remarkable phenomenon in recent months; the re-emergence of rhythm and blues as an important force in American popular music. Since it ...

Al Green's Free Music: A Groove Instead of a Hustle

AL GREEN is a rare commodity in today's music marketplace — he's a third (maybe fourth) generation bluesman, although he doesn't admit as much. A ...

IT SHOULD blow many a rock and roll mind to realize that Johnny Nash, the man who brought reggae to the top of the charts, ...

THE STAPLE Singers will occupy a unique spot in American musical history, when that work is finally written. Their combination of those antithetical forms of ...