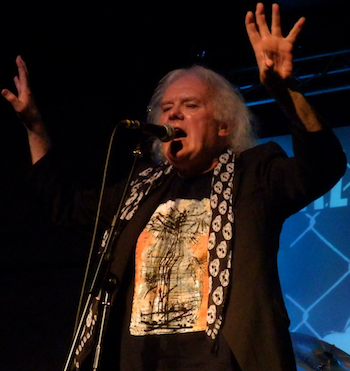 Alan Clayson is the author of over 30 books. These include biographies of Jacques Brel, Serge Gainsbourg and the Troggs, plus Death Discs, the subject of a programme he scripted and hosted on BBC Radio 2 – plus the bestsellers Backbeat, Beat Merchants and a history of the Yardbirds. A 2002 tome concerning classical composer Edgard Varèse led to Gail Zappa appointing Clayson to pen a life of her late husband. He has also contributed to such diverse journals as Rock ‘N’ Reel, The Guardian, Mojo, Sunday Times, Mediaeval World, Guitar & Bass, Vintage Rock, Hello!, Record Collector and, as a teenager, the notorious Schoolkids issue of Oz.

In the late 1970s, Clayson was spoken of in the same sentences as the likes of Tom Robinson, John Otway, Elvis Costello and Wreckless Eric. Indeed, Melody Maker decided he "occupies a premier position on rock's Lunatic Fringe" in the light of his impact and that of his accompanying Argonauts. "Alan Clayson and the Argonauts were one of rock's most glorious and enjoyable follies," averred Rock ‘N’ Reel, "and somewhere there is a parallel universe where they are bigger than the Beatles."

Clayson compositions have been covered by Dave Berry (in whose backing group Clayson played keyboards in the mid-'80s), Stairway and Jane Relf. He has worked too with The Portsmouth Sinfonia, Wreckless Eric, Dick Taylor, Jim McCarty and Screaming Lord Sutch among others.

BORN OF A musical family in Blackburn, Ashton grew up in Blackpool. Before leaving school at 15, he was already a competent pianist and organist, ...

Charles Aznavour – 10 of the best

Composer and bassist who found early success with Cream and went on to perform as a soloist and with many other artists ...

BORN IRENE Amburgey, the second of three sisters, Martha Carson was a guitarist in a troupe, led by her father, that entertained at functions close ...

KEVIN COYNE was a singer-songwriter respected by his contemporaries but lacking their chart success. Nevertheless, largely through Radio One presenter John Peel's championing, he built ...

IN 2015, 74-old Gary Glitter began a sixteen-year prison term for crimes that, seemingly, were beyond the prerogative of a rock star's outlaw chic. This ...

"The only gift I had as a producer was finding the right song. I felt I knew how it should be done and, after that, ...

Drummer and sometimes lead vocalist who worked with Frank Zappa and Captain Beefheart ...

Singer best known for his 1967 version of the anti-nuclear song 'Morning Dew' ...

Screaming Lord Sutch Is Alive And Well And Living At Number Ten...

...10, PARKFIELD ROAD, South Harrow, that is – where the mere mortal christened David Edward Sutch had tumbled out of bed just prior to the ...

Original lyricist and founding father of the English chanson. ...

A MORE TIDY-minded author might portray Charles Trenet (1913-2001) as a French Noel Coward. A multi-faceted talent, he was best known for combining qualities of ...

REG PRESLEY was the singer and principal songwriter of the Troggs, the group that put the Hampshire town of Andover on the pop map with ...

50 years later, Alan Clayson recalls a pivotal year of a '60s that was far from Swinging. ...