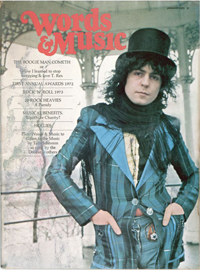 Words & Music was a monthly magazine published between 1971 and 1973 in New York.

Al Green's Free Music: A Groove Instead of a Hustle

AL GREEN is a rare commodity in today's music marketplace — he's a third (maybe fourth) generation bluesman, although he doesn't admit as much. A ...

David Bowie: Phallus in Pigtails, or the Music of the Spheres Considered as Cosmic Boogie

MIGHT ONE suggest that "the longer one studies life and literature, the more strongly one feels that behind everything that is wonderful stands the individual, ...

WE'VE BEEN experiencing a remarkable phenomenon in recent months; the re-emergence of rhythm and blues as an important force in American popular music. Since it ...

Randy Newman deals with subjects and values that are all but forgotten in contemporary pop music, reflecting in his ironic, witty songs some profundities which ...

Van Dyke Parks, surely one of the most inventive musical minds in the business, is definitely not for everybody. His first album Song Cycle came ...

ONE CAN ALWAYS COUNT on Rod for superb vocalizing, but his recordings sometimes slip because of the spottiness of the material, from marvelous to mediocre. ...

THE STAPLE Singers will occupy a unique spot in American musical history, when that work is finally written. Their combination of those antithetical forms of ...

IT SHOULD blow many a rock and roll mind to realize that Johnny Nash, the man who brought reggae to the top of the charts, ...