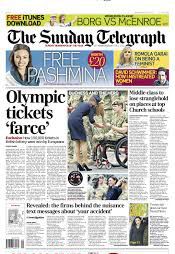 The Sunday Telegraph is a British broadsheet newspaper, founded in February 1961. It is the sister paper of The Daily Telegraph,

His records didn't sell while he lived. But since Nick Drake's untimely death he has become an icon. Mick Brown reports on a very English ...

When the news reached him, Ray Davies was sitting on the floor. ...

Karen Dalton: Who Loves You The Best Now?

Karen Dalton was a chronic recluse who died in obscurity. But now she's being hailed as one of the most original folk singers of the ...

Papa Wemba: Pop Star, People Smuggler, Jailbird, Demagogue – and all in a coat that cost £15,000

MEETING HALF of the LA quartet Rilo Kiley in a London hotel, my first thought is how much nicer this pair are - as in ...

Two of this year's most eagerly anticipated records come from young women with some striking similarities. Ben Thompson talks to M.I.A. and Lady Sovereign. ...

A NIMBLE, SECRETIVE Bob Dylan stares deep into the nowhere he's come from under the brim of a showman's black bolero. He seems to be ...

STOP ME if you've heard this one before. It's a story about Sparklehorse, the one mind band who play a short, bitter-sweet set at the ...

ON THE LEFT of the Limehouse Troxy stage stands PJ Harvey – enrobed in one of her Belgian fashion confederate Ann Demeulemeester's trademark pristine, shroud-like ...

Profile and Interview by Edward Helmore, Sunday Telegraph, 8 May 2012

IT'S CLOSE TO MIDNIGHT, a sickle moon hangs low over the Caribbean Sea in the direction of Cuba, and Grace Jones is making her way ...

Funk Pop's most durable act are still as interested in theatrics as music ...

Leonard Cohen and his eternal search for peace

IN 1999 LEONARD COHEN travelled to India to see a spiritual teacher named Ramesh Balsekar.  Cohen was a man in search, if not exactly of ...

The Beatles: Derek Taylor: As Time Goes By (Faber)

ONE MAGICAL weekend in the summer of 1968, Derek Taylor, the press agent for the Beatles, took a trip with Paul McCartney and the singer ...