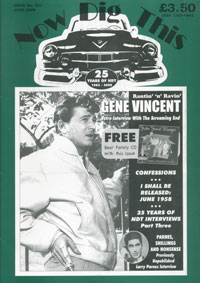 Now Dig This is an independent monthly magazine published in the UK since April 1983, and focusing on American rock 'n' roll music.

BY PURE COINCIDENCE, two founding members of the first management team of Mercury Records have died within weeks of each other: Irving Green, co-founder and ...

JERRY LEE LEWIS came to New York on September 28 and 29, 2006, with typical flourish and élan to film live performances for a PBS-TV ...

CLYDE OTIS died on January 8, 2008, in Englewood Hospital, New Jersey at the age of 83. He was famous amongst NDT readers for writing ...

AS SOON AS Jerry Wexler's death was announced on August 15, 2008, daily newspapers and rock magazines had their already-written obituaries ready to go in ...

SHELBY SINGLETON, the consummate record man who was the most capable latter-day custodian of Sun Records, died of brain cancer in a Nashville, Tennessee hospice ...

Bobby Charles, the Inventor of Swamp Pop and Songwriter Supreme

WITH ROCK 'N' roll exploding in austerity-ridden England in the mid-1950s, there was one hip phrase that stood out from the rest: "See you later ...

Retrospective and Interview by John Broven, Now Dig This, July 2010

WHEN BOBBY Charles recorded 'Later Alligator' for Chess at Cosimo Matassa's J. & M. Studio in New Orleans in autumn 1955, he was not only ...

MORGAN CLYDE "Bobby" Robinson, the longtime Harlem record man and record shop owner, died on January 7, 2011, at the grand age of 93 while ...

AFTER A PERIOD of failing health, Southern record man Huey Purvis Meaux died at home in Winnie, Texas, on April 23 at age 82. He ...

Bill Millar commemorates the life of the gifted writer and pioneering back catalogue expert whose devotion to rock n roll, blues and soul enhanced the ...