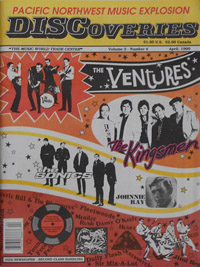 DISCoveries was an American monthly magazine that focused on the collectors' market for records, tapes, CDs, and music-related memorabilia, and included extensive discographies. It was merged into Goldmine, its principal competitor.

"I BELIEVE WE had the biggest response, of any group [at Woodstock]," says Adolfo "Fito" de la Parra, Canned Heat's drummer, who appeared with them ...

THE YEAR 1969, in rock music, was the culmination of the era of the huge outdoor concert festival. ...

HERE'S AN UNLIKELY recipe for a hit record: take one melody written in 1912 by the Vice President of the United States, add some 1951 ...

NOW CELEBRATING 50 years in business, the Atlantic Record Company is submerged in the corporate swamp of an entertainment megalith. It didn't start out that ...

A MUSICAL SAGE once quipped, "If you write music, you're a composer. If you write words, you're a lyricist. If you do both, you're Cole ...

ON A CONSTRUCTION site in Seattle, Washington, in 1959, two guitarists, Don Wilson and Bob Bogle, decided to perform together at local sock hops, initially ...