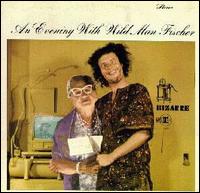 Frank Zappa and other frightening occurrences ...

FRANK ZAPPA has emerged as one of the most interesting, lucid, energetic, entertaining and creative figures in contemporary music. He has frequently complained of being ...

Frank Zappa's "It had to be done" experiment finally released after some 18 months. Many will already have heard import copies of this two album ...

THE FIRST time I met Larry Fischer was early one Sunday morning in the shadow of the Capitol Records Tower in Hollywood, at the fabled ...

LOS ANGELES — "Mark!" Larry "Wild Man" Fischer's voice crackles over the telephone. "I'm depressed. The music business is hard... I might be doing some ...

I Am The Band: Bob Log III and the One-Man-Band

Let me introduce the band to you. On the cymbal… left foot. Over here on the bass drum, we've got right foot. Shut up! My left hand does ...