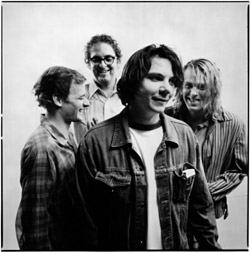 The Chicago boys talk about the making of Summerteeth, and life on the road.

WITH THEIR SECOND album, Being There, already being hailed as the record of the year, and flattering, if fanciful, comparisons to such as Exile On ...

Interview by Keith Cameron, Vox, May 1997

THE WAITRESS next door to the Blue Note desperately wants to come, but she couldn't get the night off work. "Oh, it'll be fantastic!" she ...

"WE SAW all those teenage girls outside and we assumed they were here for us. Hey, man, what gives?" ...

SUMMERTEETH, THE THIRD instalment in Wilco's quest to distil the early 1970s moment when American rock's explosive prime was replaced by pretty pop melodies is ...

Interview by Ben Thompson, The Independent, May 1999

IT'S DARK IN an alley just off Hamburg's notorious Reeperbahn, a faint neon glow filters in from the street to reveal a gaggle of noisy ...

Wilco: Taking Control in a Crisis

ROCK AND ROLL is not the first place you would look for a new form of patriotism. Yet Yankee Hotel Foxtrot, the latest album by ...

Hi, My Name's Jeff, and I'm a Wilcoholic

LIKE ALL LAS VEGAS hotels, the Mandalay Bay is a self-contained city, comprising restaurants, bars, even a "beach," complete with electric waves: anything and everything ...

THE INK THAT says Wilco YHF Demos is slightly smeared on the home-printed white cover of the CD that arrived the other day. The 21 ...

Wilco: A Ghost Is Born

SO HOW DO YOU follow the dense, experimental, critically worshipped Yankee Hotel Foxtrot? The latest version of Wilco answers with an overwhelming, at times postmodern ...

Wilco: A Ghost Is Born (Nonesuch)

After a decade of crises that would have finished off most bands, Wilco are back ...

"IF I PLAYED you all the Wilco songs in chronological order on an acoustic guitar, they probably wouldn't sound that different," declares Wilco leader Jeff ...

I FIRST POSTED the following in February, but the occasion demands that I pull it out of the archives and put it up again. What ...

"WHERE YOU BEEN?" responds an amused Jeff Tweedy to a punter's call to "play the hits", midway through Wednesday's show at the Forum. "These are ...

THE LAST TIME I wrote a review cautiously praising a band for a slow return to form, that band was R.E.M., who shocked the music ...

WILCO FANS ARE AS polarized as the US congress. Some revel in the band's eardrum-pulverizing forays into the sonic unknown, introduced on 2000's art-damaged Yankee ...

IF MOST BANDS were to announce that their 10th album, 21 years into their career, will be a largely acoustic affair, it would cause all ...

CAPABLE OF BEING as sombre as a Sunday night in with Bob Dylan or as wild as a Friday night out with the Pogues, Wilco ...

Jeff Tweedy: At Least That's What He Said

The recent publication of his autobiography and the release of his first solo album, Warm, have seen Wilco man Jeff Tweedy reflect on a remarkable ...

Wilco's Jeff Tweedy on clashing with Billy Bragg, being insulted by Diddy, and why bands don't need record labels

IN 2001, WILCO fired the first shot in a war against an industry that had done them wrong. When Reprise Records rejected their fourth album, ...