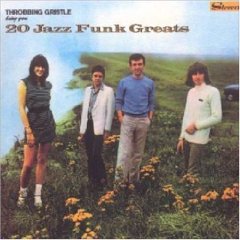 WHEN I WAS watching Throbbing Gristle where were you? ...

Throbbing Gristle: It's Never Too Late To Fall In Love

THROBBING GRISTLE are so away from the new wave scene (sort of) and so totally reviled by the standard music fans (at least, by those ...

THROBBING GRISTLE: Drop that name in any conversation and watch the reaction. Giggling or nervous laughter, disgust or horror, blankness or a polite "Who?" Yeah, ...

'All art aspires to the condition of musak.' 'Most of the people who disapprove of musak... but we are doing it for your own good!' ...

THE UNDERGROWTH OF pop...Take the mechanics of the situation as being something like this: you have a multi-million dollar industry, which has established channels whereby ...

SANDY ROBERTSON ON THE TUMESCENCE OF THROBBING GRISTLE ...

ADAM AND The Ants and Throbbing Gristle are shadowy extremes, lurking in dark corners, lethargically scratching through their overscrubbed private parts, grinning sweetly at anyone ...

Who the Hell is ALEISTER CROWLEY and why do pop people keep saying weird things about him? asks Sandy Robertson. ...

NEVER GO back. So why is he doing this, the inspired maniac? Just to show there's still air in his lungs? Chris & Cosey are ...

GENESIS P-ORRIDGE left the UK almost two years ago, hounded out by one of those peculiarly English sexsational witch-hunts that the home authorities apparently relish. ...

JG BALLARD once said that rock journalism at its best was a medium for the "real news", a means of conveying what he called the ...

Introduction to the work of recently reformed art/industrial/electronics collective. ...

This Mortal Coil: A Final Report on Peter "Sleazy" Christopherson

Report and Interview by Luke Turner, The Quietus, 19 April 2011

LATE LAST WEEK, observant souls on the internet had a look at Chris & Cosey's website and noticed that their Event Horizon page of planned ...