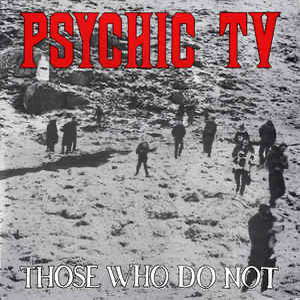 The Psychic TV mainperson talks about the sonic evolution of PTV; collaboration and connectivity, fear and totalitarianism; the 1992 police raid and exile; the changing personnel, and about S/he, Lady Jaye and Pandrogeny.

Psychic TV: The Sound of 32 Human Thighbone Trumpets from Tibet

IT WAS only last December when I concluded the debut PTV feature by suggesting that those involved might just be crazy/inspired enough to freeze-frame all ...

Psychic TV: Force The Hand Of Chance (Some Bizzarre)***

IMITATING COUNTLESS gurus before him, Genesis P-Orridge embarks here and now on a cynical and puerile journey to the heart of pantomime profundity, stopping at ...

TONIGHT'S UNPUBLICISED appearance of Psychic TV at an old disused music hall off the Holloway Road was some "event". ...

THIS IS THE STORY OF GENESIS P, HE'S THE BLOKE IN PSYHIC TV. ...

From his bizarre explanation of tattoos to his obsessive faith in causes, PSYCHIC TV's Genesis P-Orridge is the very definition of complexity. As willing disciple ...

The Genesis P-Orridge stitch up — Is This Man Sick?

NEIL PERRY goes behind enemy lines to discover the truth behind The People's expose off Psychic TV's GENESIS P-ORRIDGE ...

Psychic TV have flirted with religious and anti – religious imagery through their growth time, they set up the Temple Of Psychick Youth and, more ...

WHEN PSYCHIC TV's Genesis P-Orridge walks out on stage at the Astoria this evening, on a rare visit to London, those who've followed the career ...