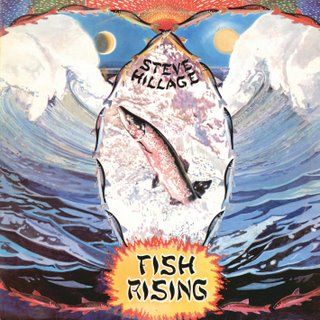 When a guy sings to you "we've all been born together in this special place and time to raise the world," where does your humble ...

Steve Hillage: On The Banks Of A Fish Dinner

"The fish really get off on it man...it's their whole trip"... New angle on Gong's STEVE HILLAGE – the world's leading exponent of Fish Rock. ...

We proudly present GONG Now, in which assorted Gauls and other Foreigners explain (sort of) certain radical changes and new concepts which may extend the ...

Steve Hillage: Watch Out There's A Concept About

IT WAS instant karma out to get me. The sound of one hand clapping – so fast you can't even hear it. We had been ...

Steve Hillage: The Axeman Of Love

"I WON'T PLAY if they don't play," said Steve Hillage and a French girl dressed as a clown and holding a saxophone looked pleased, tour ...

AS I RECALL, it was the "livin' jukebox" himself, Andy Dunkley, who first assailed my ears with Steve Hillage's album Fish Rising. ...

"Steve Miller didja say? Aw, Steve Pillage. No? Village?..." OK, we surrender. These Yanks will never get it right. So this is the story of ...

The new Steve Hillage: The Man Who Gets Things Done. ...

THIS COULD have been very embarrassing if you lot had caught me at it. I was cruising round the kitchen introducing my ears to this ...

ONE OF THE MOST pleasant incidents I recall from last year was an afternoon spent in a summery open-air cafe in Notting Hill with Steve ...

AN ORB tour is already a pretty Zen concept without letting veteran hippy guitarist Steve Hillage out on a one-off day pass from Hillage Village. ...

Profile and Interview by Nick Coleman, Independent on Sunday, 14 January 2007

Steve Hillage was a prime groover on the Canterbury psychedelic scene of the Seventies and still makes far-out trance music today. So why do people ...