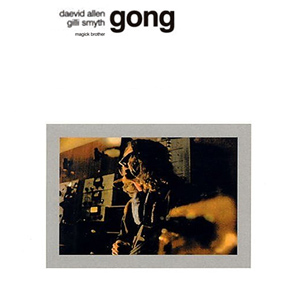 Someone once said that if Dylan Thomas was alive now he'd be writing for a rock group. Daevid Christopher Allen is the perfect example of ...

FRED DELLAR. Nothing strange about that name is there? It's sort of, well, homely, Comforting. And he lives in Badger's Walk, too. A far cry ...

THERE'S A lot of musicians around that are going to be kissing Mike Oldfield's dirty underpants. The success of Tubular Bells has almost certainly uncovered ...

Gong: You See A Lot Of Frenchmen With Berets... But Not Too Many With Fried Eggs On Their Heads

GONG'S HOTEL in the Avenue de Wagram in Paris is directly opposite the Salle Wagram where they are due to gig tonight. It should take ...

The Roman Spring Of Mr. Wyatt Thrill to the chariot racing. Dice with death in the streets of the Italian capital. Listen to the music. Special ...

THE HALL was packed. It was the kind of audience that likes to jostle like mad for the first half of the set, blast a ...

We proudly present GONG Now, in which assorted Gauls and other Foreigners explain (sort of) certain radical changes and new concepts which may extend the ...

THE LINEUP CHANGES have been so substantial and the musical direction has altered so drastically since their last album (You), that Gong might have changed ...

AS I RECALL, it was the "livin' jukebox" himself, Andy Dunkley, who first assailed my ears with Steve Hillage's album Fish Rising. ...

THE PRESENT Gong lineup includes only three of the members of the line up on the last album Shamal. They are Didier Malherbe, Mireille Bauer ...

THIS IS a double album of many distinctions. For instance, I've never known a record feature the line 'have a cup of tea' so often. ...

TWO CHAPTERS in the life of Daevid Allen, space dingo and nomad of nonsense. ...

Profile and Interview by Nick Coleman, Independent on Sunday, 14 January 2007

Steve Hillage was a prime groover on the Canterbury psychedelic scene of the Seventies and still makes far-out trance music today. So why do people ...

Gong: The Gong Remains The Same