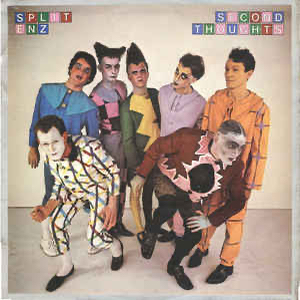 NO DOUBT ABOUT IT, Split Enz is a strange band. They walk out on stage like a collection of clockwork scarecrows and their music is ...

ME MAM says they're not as good as 10cc and "that group who did the operetta?" "Queen?" "Yes and that one about Ground Control to ...

A TRIP to the sea end of Wardour Street is always fine by me, so Tuesday found me on the Chrysalis bus to Brighton to ...

Noel Crombie (he’s the one with the cute coiffure) reveals the horrors of shopping in Sainsbury’s…and much more ...

THE IDEA that a rock band from New Zealand should possess any merit whatsoever strikes many as ludicrously funny; the idea that such an antipodean ...

SPLIT ENZ are mainly a musical theatrical troupe, not that that's a slagging off because they are also talented musicians. It's just that the first ...

DIZRYTHMIA. "We got the album title from a pamphlet in a plane. It happened to mention the medical name for jet-lag circadia disrhythmia. It means ...

OK, IT'S only two months since I last covered Split Enz at this very same Middlesbrough Town Hall. Deja revu? No way. In December they ...

THE NAME might just ring a bell. Split Enz, the most unlikely musical product of the Antipodes (taking it that Duffo has nothing to do ...

THE NAME might just ring a bell. Split Enz, the most unlikely musical product of the Antipodes (taking it that Duffo has nothing to do ...

ALL A friend remembers about the Split Enz gig at Paul's Mall a couple of years back was the sign announcing the coming attraction: Tom ...