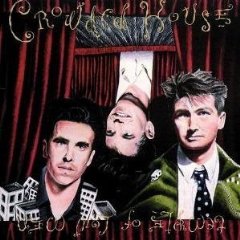 Crowded House: In With The In-Crowd

THE ARRIVAL of Crowded House in the UK charts with their debut single, 'Don't Dream It's Over' (Capitol), comes three years after the demise of ...

GOOD TUNES, good singin', good playin'. These are the seemingly modest virtues presented by Crowded House. But, as they amply demonstrated throughout their superb 16-song ...

"WITH ALBUMS, you can't just play it straight on every track. If a song wants to be a hit, if it seems like — done ...

Crowded House: Don't Dream It's Over

WHAT A QUEER old month it's been for past and present members of Crowded House. In June they visited the UK to sequence their album ...

SATURDAY NIGHT in Glasgow, traditionally the comic's most difficult audience, and it's time to give a big hand to two young fellows with a bright ...

NOTE: In this excerpt from Chris Bourke's Crowded House biography Something So Strong (Pan Macmillan Australia, 1997), drummer Paul Hester has been brooding for months ...

THERE'S A lush, green exotic-ness to Neil Finn's songs, as if they were created in some kind of hothouse rain forest where only the most ...

PAUL HESTER was known as "Hester the Jester," the clown prince of Crowded House. He was the one who gave the band its personality on ...

Once their children had left home, Crowded House songwriter Neil Finn and his wife found themselves with too much time on their hands — and ...

Retrospective and Interview by Graeme Thomson, The Word, October 2011

Crowded House's recording career was becalmed in 1990 until an unplanned injection of sibling rivalry sparked off the masterpiece that was Woodface. It couldn't last ...