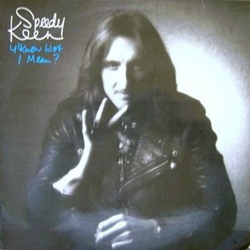 JOHN 'SPEEDY' KEEN is the rock and roll war-horse who wrote 'Something In The Air' for Thunderclap Newman. He's recovered from that – scarred of ...

Knockabout drummer John "Speedy" Keen was rescued from oblivion by a perceptive Peter Townshend, who saw in Mr. Keen an offbeat but potentially compelling talent. ...

From Out Of The Shadows Comes Speedy Keen

IF SOMEONE EVER asked me to compile a list of my ten favourite singles of all time I'd have five 'definites' straight away and about ...

"BASICALLY, YOU'RE TALKING about a lorry driver who was thrust into it because he had a number one for seven weeks." ...

ONE IF THE many things of which any court of law would instantaneously acquit Speedy Keen (along with singing in a thunderous bass voice and ...

"ONE BRIGHT spark at Track had a great idea for promoting ‘Previous Convictions’ – he sent out plastic turds, like you get in novelty shops, ...

Review by John Morthland, Creem, May 1976

SPEEDY KEEN'S basically comical persona is good enough by me: the inebriated ex-Mod, a tad daft, struggling for equilibrium in a world whose quirks don't ...