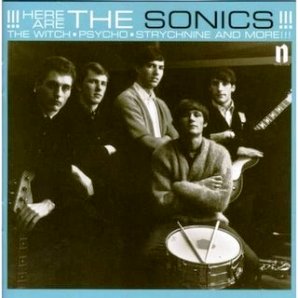 She's got long black hairAnd a big black carI know what you're thinkin'But you won't get far!She's gonna make you itch'Cause she's a witch! ...

The Sonics, Kenny & The Kasuals, The Litter reissues

SUPPOSE I TOLD you there actually existed a band at one time (say around 1965) who sounded like (but better than) the Kinks on 'All ...

THIS IS YOUR BIG CHANCE! Yes, it’s all coming back. Following the rock & roll revival, the surf music revival, and the reggae revival, the ...

Have Love, Will Travel: In Praise of the Sonics

IT ALL STARTS with Richard Berry. He never received a Nobel Prize for writing 'Louie Louie', but to this day it beats me why – ...

The Sonics: Here Are The Sonics

MUDDY WATERS, he said, "I'm smokin' TNT, I'm drinkin' dynamite/I hope some schoolboy will start a fight." Maybe Washington's The Sonics were the answer to ...

CALL IT DENIAL if you like, but sometimes you have nothing to gain and a hell of a lot to lose if a band you've ...

The Sonics' Backstory Blows Their Better-Known Beer Ad Away

THE MODELO beer commercial that ran for a couple of years beginning in 2013 still seems fresh in the memory. A guy and his two ...

Retrospective and Interview by Mark Kemp, Creative Loafing, 17 May 2017

WHEN MILD-MANNERED Rob Lind isn't on the links at Birkdale Golf Club with his wife Suzanne, or on his boat with his son Robbie during ...