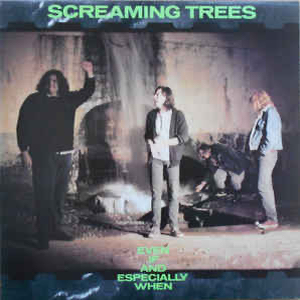 SCREAMING TREES' last album, Invisible Lantern, curdled my milk of human kindness two months ago with its lacklustre production and half-hearted nods to the Sixties. ...

IT SEEMS incredible people still miss the point of Tad. Most (heavy) rock bands play for the sheer hell of it, and, sure Tad do ...

THOSE OF the opinion that rock 'n' roll is a soft option are advised to cast a cynical glance at the Screaming Trees. Singer Mark ...

Are these guys for arboreal? Nursing an enviable collection of broken bones, SCREAMING TREES are pulling away from their Seattle roots and branching out into ...

IT IS THE second of a pair of Seattle homecoming shows that close their tour with Alice in Chains, and Screaming Trees are well into ...

IT IS being talked up in the music press as the "rock masterpiece" of the year, and there is indeed something special about Dust, the ...

The members of Screaming Trees get very little enjoyment but plenty of good music out of being in a band together. ...

FOR A gig you might've expected to be a pissed–up, beery slop, all bum–notes and chaos, it's all in the subtleties of feel. This is ...

Over a series of solo albums, work with Screaming Trees and Queens Of The Stone Age, among others, Mark Lanegan has proved his worth as ...