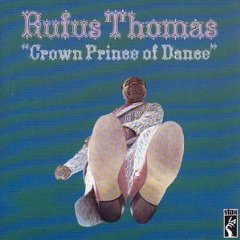 Rufus Thomas, between mouthfuls, talks about his youth in segregated Memphis, Minstrelsy, Ike and Tina Turner and his long involvement with Stax Records.

REHEARSALS at Top of the Pops. A man who looks close to 50 years old goes up to a taller, younger man in dark glasses. ...

Richard Williams in the Soul capital of America ...

RUFUS THOMAS was half-way through a busy tour the last time we met. This time round I caught up with him just two days before ...

BRITAIN HAS always been a happy hunting ground for Rufus Thomas, right back to his first tour in 1967, not so long after notching up ...

THE whole idea of WATTSTAX '72 was splendid. It enabled more than 100,000 people to attend a seven hour concert at the Los Angeles Coliseum ...

ISAAC HAYES, ROD STEWART and assorted FACES were at the preview of a new soul film. So was MM's RICHARD WILLIAMS... ...

THE BIGGEST soul concert ever was about to end in a riot. ...