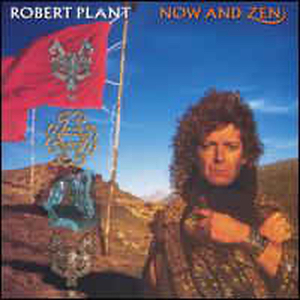 IT'S ALWAYS HARD to know what to do when the drummer drops dead. The Who and the New York Dolls recruited new ones and pressed ...

BACK IN the Spring of 1968, things aren't looking too rosy for 19-year-old singer Robert Plant. His promising group The Band Of Joy have just ...

From the Miracles to Buffalo Springfield, Robert Plant revisits the music that most influenced his musical youth: Bo Diddley; the productions of Joe Meek; collecting records and the Black Country scene; the move from R&B to psychedelia, and blues, blues and more blues...

The former Led Zeppelin frontman on his current solo project: on his new band and their youthful enthusiasm; on the depth of his roots in the blues, and musical theft; how John Bonham's death meant the end of Zep; on the music that inspired his youth... and how old rockers like him can remain engaged with the present.

A somewhat wind-blown interview: on digging back into his pre-Zep archives for Sixty Six to Timbuktu; discovering his voice as a young singer; life and career post-Zeppelin.

Robert Plant: Down To The Roots

ROBERT PLANT lives in an old, rambling farmhouse near Kidderminster, on the edge of the Black Country, with his wife Maureen, baby daughter Carmen, dog ...

Interview by Chris Charlesworth, Creem, May 1976

MOBY GRAPE INTO THE VOID ...

Robert Plant: Into The Light

Led Zeppelin now a fond but distant memory, Robert Plant turns his attention towards a new solo album, a new band and a world tour ...

"WHY DON'T you take off your clothes?" asks Robert Plant, grinning, clutching at the bare white towel wrapped around his waist. ...

BACK IN THOSE firebrand days when I foolishly believed that the Ramones and Sex Pistols could overturn the whole rock establishment, I often felt that ...

Percy Pulls It Off !

Yes, the one-time wild man of rock Robert ‘Percy’ Plant in "interesting solo album" shock! And now he tells it like it is, jumps to ...

AS LUCK WOULD have it, just a couple nights ago I tuned in Radio 1990 and caught the ever-photogenic Mr. Plant, who was being grilled ...

Robert Plant: Deference to the Taskmaster

In team play, where everything clicks, somebody has to call the shots. ...

"I CAN'T BLAME anybody for hating Led Zeppelin. If you absolutely hated 'Stairway To Heaven', nobody can blame you for that because it was, um...so ...

A FEW MONTHS back, Robert Plant walked into Atlantic Records' London offices and played 'Scream', by Ralph Nielsen & The Chancellors. Now, I dunno if ...

YOU HAVE to feel a little sorry for Robert Plant. Since the breakup of Led Zeppelin, the singer has put together a successful solo career ...

ROBERT PLANT'S ALBUM Now And Zen was one of 1988's more delightful surprises: whilst quoting in jest from his own proud past in Led Zeppelin ...

This month’s tour by Robert Plant, which reaches England tonight, has been his first European jaunt since his days with Led Zeppelin, the band which ...

AT ONE point during his performance this evening, Robert Plant throws back his golden locks and lets loose what sounds like an Islamic call to ...

Lunching with the Elder Statesmen of Charity Rock: The Nordoff-Robbins Concert, Knebworth

WHEN QUINCY JONES gathered together his USA For Africa superstars to record 'We are the World' five years ago, he pinned a sign outside the ...

IN DAYS OF yore, the elders tell, the grassy slopes of Knebworth would resound to the pagan strains of Lynyrd Skynyrd, The Allman Brothers and ...

"After half an hour Elvis' bodyguards motioned that it was time to go. As they were leaving Robert gushed, 'Elvis, you're my idol. Thanks for ...

FOR A MAN who's spent the last 20 years protesting that his own colourful history is of little interest to him, it comes as a ...

FATE OF NATIONS is Robert Plant's seventh solo album. Must be some mystic significance there for you Zen and Manic Nirvana freaks. Robert too, judging ...

This is a transcript of Adam's audio interview with the former Zeppelin man. Hear the audio here. ...

"CAMION! CAMION!" comes the cry from the front seat of the rented Mercedes wagon. "I don't have time to die!" ...

ROBERT PLANT, looking very fresh with only 27 years of rock 'n' rolling under his belt and leather jeans, is seated in the lone hotel ...

ROCK GODS SHOULD never leave their Olympus, in particular if they happen to stroll along a Parisian street during the city's Marathon. ...

IT'S NOT a question much asked, but what if Messrs Page and Jones had managed to secure the services of their first choice, Terry Reid, ...

AS A '70s icon, Robert Plant can't help it if he evokes fuzzy nostalgic feelings, but he is trying his best not to simply phone ...

Mountain Man: Robert Plant Goes Back to his Welsh Roots

WHEN YOU'RE TOLD that Robert Plant will meet you on the platform of Machynlleth station in southern Snowdonia, you figure, "Sure, some hapless lackey will ...

For Robert Plant, life after Led Zeppelin has been anything but predictable. Resisting attempts to coast on the Zep legend, Percy has trodden his own ...

Report and Interview by Gavin Martin, Daily Mirror, 2 May 2008

A LIGHT BREEZE of mellifluous music wafts from behind the half-open door of a long, low, bunker-like building nestled deep in the English countryside. Inside ...

Backstage in the '60s

LIFE BACKSTAGE AT pop shows in the Swinging '60s was always a hoot. Looking back, it's fun to recall how casual and relaxed it all was ...

ROBERT PLANT entered the new millennium with an album that looked defiantly backward – not to Led Zeppelin, mind you, but to a round-up of ...

ROBERT PLANT'S 2007 ALBUM with pop-bluegrass songbird Alison Krauss, Raising Sand, did something 25 years of solo records never quite managed. It fully transformed him ...

Robert Plant: How I got my "big voice" out again

ROBERT PLANT stands on a small stage 4,500 miles from his birthplace, and yet he's never been so close to home. ...

This Must Be The Place: Holy Grails and Musical Meccas in Pop Culture

FOR TRAMPLED UNDER FOOT, my oral history of Led Zeppelin, one of the interviews I conducted was with Dave Bates, an almost-famous A&R man from ...

IN OUR SERIES where great musicians tell the stories behind memorable records from their back catalogue, the Led Zep frontman discusses his enduring love for ...

This grandfather of rock's voice may have lost its high register, but the former Led Zeppelin singer's raw power remains. ...