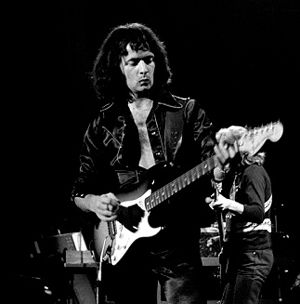 Ritchie Blackmore performing in Norway in 1977

2012 NOTE: This Q&A hails from circa June 1973, for an interview published in Creem in September that year. It broke the story about the ...

Blackmore: I Was Getting Lazy

RITCHIE BLACKMORE'S DEPARTURE from Deep Purple comes as no surprise to followers of Deep Purple who have watched their activities closely over the years. For ...

Ritchie Blackmore: I Want To Tell You What I've Been Doing

AS DAVE SCHULPS and I rolled along in the darkness to our impending interview, we were filled with apprehension. After all, Ritchie Blackmore has never ...

IT'S A MIGHTY LONG WAY DOWN ROCK AND ROLL AND RITCHIE BLACKMORE HAS GOT THE SCARS TO PROVE IT. CHRIS CHARLESWORTH TRACES THE TWENTY YEAR ...

Ritchie Blackmore, the penultimate electric guitar player, perhaps the main proponent of the Marshall/Stratocaster combo, has traded in his stacks for a tambourine and an ...

FEW MUSICIANS possess an aura of mystery as impenetrable as that of legendary guitarist Ritchie Blackmore, whose distinguished career has seen him compose some of ...

"I'm at that stage where I will play anything I want to. I will not be dictated to by fans or people who say: 'You ...