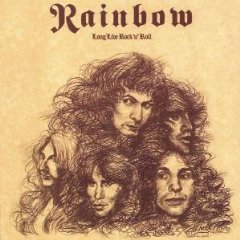 HE IS FAMED for cultivating a public image that extends beyond even the bounds of the antisocial. Even with Deep Purple, his own band, his ...

THE CALIFORNIA CLIME seems to agree with Ritchie Blackmore, a usually unhealthy looking fellow whose complexion runs somewhere between spoiled flour and banana yogurt and ...

Rainbow Rising: Ritchie Blackmore Gets It Up

"WE'VE GOT The Rash from Stamford, Connecticut" reveals Mr. Ritchie Blackmore, "we've got Cozy Powell, the finest nonprofessional driver in England. Not to mention me, ...

Rainbow: If You Don't Like Rock'n'Roll, It's Too Late Now

"We're not in Kansas We must be over the Rainbow" – Judy Garland, Wizard Of Oz ...

SO THERE we were, surrounded. But where does the story really begin? ...

There'll Always Be A Rainbow As Long A Ritchie's Here

Well, and as long as Cozy and Ronnie are still here, and as far as you — dear SOUNDS reader — are concerned, as long as Pete ...

There'll Always Be A Rainbow As Long As Ritchie's Here

"THERE'LL ALWAYS be a Ronnie, there'll always be a Cozy and myself in Rainbow and that's all that matters, others may come and go because ...

MENTION GUITARIST Ritchie Blackmore around so-called "intelligent" rockers and you'll just get a bunch of barf noises in response. ...

HEAVY METAL at its stalest has few rivals in the all-time tedium stakes. Monsters of Rock, recorded live at Castle Donington in Britain, is not ...

IT'S A MIGHTY LONG WAY DOWN ROCK AND ROLL AND RITCHIE BLACKMORE HAS GOT THE SCARS TO PROVE IT. CHRIS CHARLESWORTH TRACES THE TWENTY YEAR ...

MOST PEOPLE reckon Ritchie Blackmore's a miserable bastard. Mean, moody, mysterious, macabre and, by implication, Mandraxed to the gills, the Blackmore of popular imigination has ...

ONE REASON for the selection of ace heavy metal guitarist Ritchie Blackmore as one of our subjects relates to a previous, slimmer and somewhat inferior ...

SURPRISINGLY, despite the title, this isn't a concept album based on Ross Halfin's extravagant sex life. ...

"I'm at that stage where I will play anything I want to. I will not be dictated to by fans or people who say: 'You ...