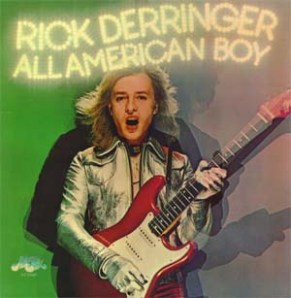 FOR TOO long there, it seemed to Johnny Winter like he would never be known for his music as much as he would be known ...

Johnny Winter: Behind the Scene With Steve Paul

THE BIG dusty black Cadillac limousine comes rolling around the comer at Twenty-First Street, turns into the dimly-lighted stage-set stillness of Gramercy Park East, and ...

THE OLD LITANY of the man with the cigar ("C'mere kid I'm gone make you a star") has been recited so often that it might ...

RICK ZEHRINGER, one time leader of the McCoys, is now better known as Rick Derringer, the All American Boy. Through his work with Johnny and ...

From 'Hang On Sloopy' to the Winter Brothers – and now Rick Derringer's got a hit US single and album ...

AND THE PATTERN continues: to rock music cultists, the real excitement and spotlights do not always lie with the finished product, the hit single. It ...

When the Edgar Winter group exploded onto the record charts last year, few people expected the band to emerge as a whole triumvirate of rock ...

Take one midget, add a small guitar, wind him up and hear him talk ...

RICK DERRINGER's Manhattan home reflects nothing that might he called "rock star chic". Though his stereo set-up is large and an acoustic guitar may occasionally ...

Rick Derringer: This Man Is Aiming To Kill

Excuse the pun – it's Rick Derringer, of course, knockin' 'em down with hardnose rock'n'roll. ...

KNOW ABSOLUTELY zero zilch about this Rick Derringer cat 'cept the basic facts, mac – like he was once in the McCoys (Rick's been told ...

PRODUCER MIKE Chapman, once removed from his baronial digs in the hillier regions of Beverly Hills and ensconced in the recording studio, sheds his bemused ...

RICK DERRINGER, walking away with both the Alvin Lee Memorial Award and the Suzi Quatro lookalike rosette, played a set at The Roxy that shook ...