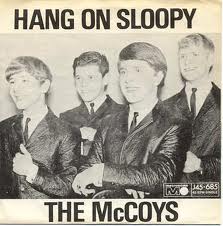 New to the Charts: The McCoys on New Label

IT'S IMMEDIATE success for the Andrew Oldham-Tony Calder "Immediate" disc label — and a first NME Chart entry for the American group the McCoys! The label's debut ...

Top Recording Stars Tell How Sweet It Is!

Profile and Interview by Loraine Alterman, Detroit Free Press, 27 May 1966

GENE PITNEY came to town last Sunday night with some of the hottest recording stars in the business to put on a show at Ford ...

The McCoys: The Infinite McCoys

THE IDEA of Johnny Winter, Texan albino, blues guitarist and underground legend, working with the McCoys, bubble-gum lightweights sold on their teenage looks, would have ...

Immediate Records: Happy To Be Part Of The Industry Of Human Happiness

Sudden impact: Best of the label that brought us the Small Faces…and Jimmy Tarbuck. ...

'Sloopy' Hangs On: How a Latin-R&B Song Became a Pop-Rock Anthem